Not to be mistaken with the character SonSon III.

SonSon (ソンソン) is a platform game released by Capcom in July 1984 that is loosely based on the Chinese classic novel, Journey to the West. It is the first game in the SonSon series.

The player assumes the role of a monkey boy (who is patterned after Sun Wukong from the story) and fights their way from one side to another, eventually reaching the statue of Buddha. One battles bats, rats, and mad bombers along the way with his stout fighting rod that shoots balls of fire. The game was ported from the arcade to the Nintendo Famicom in Japan, and eventually included in Capcom Classics Collection in North America. It is available for purchase on the Virtual Console. This game also had a sequel that was later released on the Turbografx 16/PC Engine called SonSon II.

The game is a 2-D sidescrolling platformer. The screen scrolls automatically, only stopping to fight major enemies. The screen features six continuous platforms that occasionally feature small gaps. SonSon and TonTon walk automatically across these platforms. Pressing up or down will cause them to jump up or down to the next platform. Pressing left causes them to move more slowly than the screen scrolls, essentially continuing to move forward, but at a reduced pace. Pressing right does the opposite - SonSon and TonTon will move across the platforms faster than the screen scrolls. The duo have only one attack - the ability to fire energy blasts from their poles.

Touching an enemy or an unfriendly projectile causes the player to lose a life. If a player has any additional lives, they will return to the screen riding on a cloud that will give them temporary invincibility. If the player presses the control stick in any direction, the cloud will disappear and the character will resume its usual walking mode. The cloud will eventually disappear on its own, even if the control stick is not used.

Power-ups come in the form of various fruits which produce points. Enough points will give the player an extra life. Gathering certain fruits will cause all enemies currently onscreen to turn into point-bearing fruits. Walking across certain platforms will randomly cause a bamboo shoot to sprout, yielding many extra points. 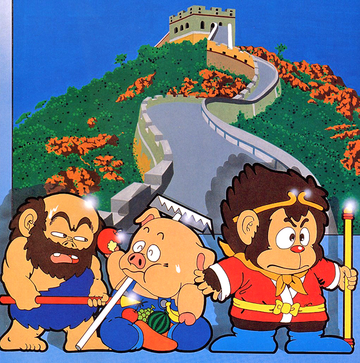