Sodom (ソドム, Sodomu?) is a character from both the Final Fight and Street Fighter series. He was a top member of the original Mad Gear Gang. A Caucasian male born in the United States, Sodom is obsessed with Japanese culture. He is well-versed in many elements of Japanese culture, though his usage of the language is somewhat dubious.

In the original Final Fight, Sodom controlled the Mad Gear gang from the Metro City Subway. He was undefeated in underground pro wrestling, albeit due to his use of "foreign objects" (the swords), until he met Guy, Cody and Mike Haggar. At first Sodom was honored to face a true ninja of Japanese descent like Guy, but this honor would turn into deep shame as Guy and his allies beat him. From then on, Sodom hated Guy for not only being one of the people to rid Metro City of his gang, but for destroying his undefeated streak which proved in his mind he was no match for a true Japanese fighter. The incident also cost him a lot of respect amongst his fellow gang members.

Final Fight Revenge showed Sodom's determination to resurrect Mad Gear (this gang actually seems to be the same Mad Gear in Final Fight 2) and his decision to go to Japan to find strong warriors for the new organization. The new crime syndicate was established all about the world and was held together by a powerful second-in-command-a Japanese kabuki named Retu. Rolento, Sodom's proclaimed blood brother, was also part of the criminal organization. Guy's fiancée Rena and her father Genryusai were kidnapped by them as part of a revenge plot, but this Mad Gear fell at the hands of Haggar, Maki and Carlos. Mad Gear was defeated permanently.

Street Fighter Alpha 2 reveals why Sodom wasn't seen in FF2. He was attempting to find more strong warriors for the gang. He had an argument with Rolento over how the militant man had lost sight of their gang's ideals, to which Rolento snapped back that he had never lost sight; he was simply trying to find a successful way to implement them. The two fought, and Sodom lost. Sodom had also attempted to recruit E. Honda and fought him in a sumo match, but failed to win the match and his objective.

After possibly fighting Honda in a friendly rematch, the Japanese aficionado met Rolento again in Street Fighter Alpha 3, where he once again lost to Rolento in another fight over their values. Despite losing, he tracked Rolento down to Shadaloo's base containing the Psycho Drive, and found Rolento decrying it as a poor attempt to control people. Sodom realized that Rolento did not lose sight of Mad Gear's ideals, and the two reconcile their differences. They decided to work together toward making a great utopian nation.

In combat, Sodom wears tabi and geta, samurai gauntlets, blue jeans, body armor, and a samurai kabuto with a mask.

On the front of his outfit, Sodom has scrawled the Japanese kanji shi (死), meaning "death". However, this kanji is not written properly, looking more like a mixture between this kanji and kokoro (心 - means "heart") and actually has no meaning. Sodom's failed attempt at Japanese calligraphy emblazoned across his chest at all times is meant to be humorous.

He is never seen fighting without a pair of jutte or katana blades, making him one of the few characters to appear in the Street Fighter series to use weaponry. In the English version of Final Fight, both katana are named Masamune, and Muramasa in the Japanese version.

Sodom is the only character in Street Fighter Alpha 3 whose weapons depend on what Ism is used. If using X-Ism fighting style, he'll use his katanas; otherwise, in the A-Ism and V-Ism styles, he will use his jitte. This is because his X-Ism visage is based on his Final Fight appearance.

Sodom was notable for being fairly difficult to defeat head-on in the original Final Fight, due to his dash attack being nearly invincible and quite damaging. However, it is possible to defeat him without actually taking any damage at all if the player approaches him along a vertical axis and uses grabbing and throwing moves, since his dash attack can only move horizontally or diagonally. Successful application of the above method can allow the player to easily defeat Sodom without harm, since he is the only boss character in Final Fight who does not have henchmen to back him up during battle.

Use Of Japanese Language

Since Sodom is an American character trying to speak Japanese, he is a comedic object of ridicule in his failed attempts at the language. In the Japanese version of Street Fighter Alpha, Sodom's inability to speak fluent Japanese is portrayed in his win quotes by having him use English words that are pronounced similarly to whatever Japanese words he's trying to say with a Japanese translation below. For example, his attempt to call his opponent "truly pathetic" in Japanese is rendered to "SHOW SEA SEND BANG", which is somewhat close to what he's trying to actually say (shoushi senban): this can be somewhat likened to a reverse version of ateji. American releases, however, show Sodom's misheard wordings of Japanese words, but with loose romanizations of what he was trying to say.

In his Street Fighter Alpha ending, Sodom unfurls a scroll that is meant to read "Mad Gear", using Japanese script. However, the humor lies in that Sodom failed to write the scroll in katakana, and instead used the kanji "魔"-(ma), "奴"-(do), "義"-(gi) (miswritten) and "亜"-(a) to phonetically spell out Mado Gia (Mad Gear). Because each kanji has meaning, this appears to the Japanese reader to be a nonsensical coupling of characters: "devil", "guy", "honor", and "to come after" as in a rank or position. "亜" can also mean "Asia" or "mute". In response, his companions just rebuff him, calling his idea "stupid". The japanese line "Die job death car?" he uses after winning has a simliar pronounciation of the Japanese phrase "Dai joubu desu ka?", which means "Are you ok? / Everything cool/ok?". Even though the English phrase makes no sense, a Japanese-speaking person might find it risible.

The "shi" (死) kanji on his armor is miswritten (see Appearance).

In the American SNES version of both Final Fight and Street Fighter Alpha 2, his name was changed to Shogun or Katana, because his actual name is the same of one of the cities destroyed by God (along with Gomorrah) due to its pagan ways, as well as guarding relation to sodomy.

In Street Fighter Alpha 3, Sodom has different stage music from normal if you use the X-ISM style of fighting and he fights with two Katanas like he did in the original Final Fight.

Apparently, in Mighty Final Fight, a non-canon game, there are three Sodom brothers, consisting of Sodom, Masamune, and Murasame.

He was originally supposed to be in Final Fight: Streetwise, along with Poison. Art of the pair was featured in the comic that came with pre-orders of the game, but for some reason both characters were excised before its release.

In the original Final Fight, Sodom is the only boss character who does not call for reinforcements, opting to fight one-on-one. 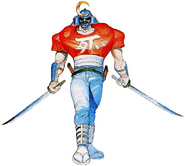 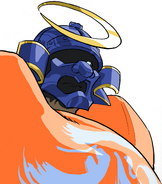 Street Fighter Alpha Ending
Add a photo to this gallery
Retrieved from "https://capcom.fandom.com/wiki/Sodom?oldid=48542"
Community content is available under CC-BY-SA unless otherwise noted.