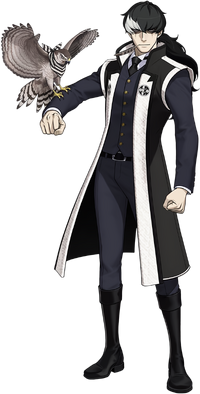 Simon Blackquill is a character from the Ace Attorney series of adventure visual novel games. He made his debut in Dual Destinies as the game's rival prosecutor.

A pale man with black eyeshadow and a feather in his mouth, he was ordered to stand in court despite technically serving a murder sentence; made quite clear with the large pair of handcuffs connected by a chain on his wrists. Blackquill also carries a hawk named Taka on his right shoulder. Blackquill uses psychological manipulation techniques. He also has his own interjection in court, which is "Silence".

In the events of Dual Destinies, it is revealed he took the blame of Metes Cykes' murder to prevent Athena Cykes from suffering further, a facade he fought to maintain; but this also had another purpose, to lure the real killer, an international spy and disguise master only known as The Phantom.

As it was later revealed from wagering his very life for the truth, Phoenix Wright finally establishes Simon was not the killer at all, and all clues points to Bobby Fullbright, whom The Phantom was disguising as. After a grueling fight in the court, Simon is acquitted, his death sentence overturned, and put in charge of the Prosecution panel in his official capacity, and no longer as a convict.

Now officially a prosecutor again in Spirit of Justice, he aids Athena in her own case as her counsel.