Sieg is a young "Knight of the Dark Glyph" and a "Legionator" who summons "Chaos Legion" with the forbidden power of the darkest of Glyphs, bestowed unto him by edict of the Order. Following the commands of the Order of St. Overia, Sieg and his fellow knights combined their powers to seal the Spirit of Purification and close the gateway to Chaos forever. Fighting side-by-side in battles of the past, Sieg became close friends with Delacroix. The Order selects Sieg to track down Delacroix, his former friend who now serves the dark side.

Sieg Wahrheit was born in the year 771. By fighting side-by-side in battles of the past, Sieg became the best friend of Victor Delacroix and his lover, Siela Riviere, but when they sealed the Gateway of Chaos, Delacroix was infected by the darkness of Azrail and killed Siela. When he woke up, he couldn't remember anything and blamed Sieg for her death, starting his journey to steal the Three Sacred Glyphs.

In Rotarl, the high priest of the Order of St. Overia tells Sieg that Victor Delacroix killed Sir Clovis and stole the Apocrypha of Yzarc. Along with Thanatos, Sieg fights his way through the many balor and zeodagda in the city streets. After defeating the seven babdh commanders, Sieg reaches the central square and obtains the Sword Crest. A masked man awaits for him, and with a single glimpse, the mysterious figure breaks the Ultimate Crest in nine pieces, dismissing Thanatos and separating its nine pieces through the world. The masked man is Victor Delacroix, who, after a short clash, defeats Sieg with an illusion and leaves him with severe injuries, telling him that "the sinner shall be atoned" and that he will be punished much more before he can die. After this, Delacroix vanishes.

Three years after the events at Rotarl, Victor Delacroix destroys and seizes Dyfan in a single night, leaving no survivors, blood stains or bodies behind, only a message written in blood saying: "I am indeed the punishment for your sins. I am here to purify the three worlds." The fact attracts the interest of the Order of St. Overia immedialtely, and they send Sieg, as well as many Maidens of Silver, to investigate the city. When Sieg arrives, most of the maidens were killed by a babdh, with the exception of Arcia Rinslet, who is then saved by the Legionator. The two of them bury the dead Maidens of Silver and follow Delacroix to the ruins of Murdoa. In the ruined city, Sieg and Arcia find the Glyph of Ascension. After a short greeting, Sieg fights Delacroix, but is defeated by his "dark lightning". Arcia shoots at the traitor twice, but Victor merely expels the bullets and heals himself with his "darkness regeneration", a third shot is stopped by his telekinesis. Delacroix then takes the glyph, leaving Murdoa.

At night, in the lakeside of the city, Sieg has regained conscious and Arcia asks him about the three glyphs; after his answer, many monsters appear. After fighting their way through the city, Sieg and Arcia head towards Misty Ravine, with the intention of stopping Delacroix before he reaches Kuzca Cave, where the Glyph of Destruction is located. After fighting their way through Misty Ravine and Kuzca Cave, the duo encounters Victor Delacroix. Already in possession of the Glyph of Destruction, Delacroix defeats Sieg with a physical illusion and leaves the cave. Arcia takes Sieg to a wooden house in the middle of the forest between Misty Ravine and Yzarc.

Sieg and Arcia fight their way through the "aerial cloister" area of Yzarc, passing through the many square of the city and, upon reaching its center (also known as core), the duo have another encounter with Victor Delacroix, who had obtained the Glyph of Primal Sin. Now possessing all of the Three Sacred Glyphs, Delacroix challenges Sieg again, and the two of them have a violent battle. The clash ends with Sieg's victory, but due to recklessness, Victor is able to stun the Legionator]] and move to Rotarl.

The duo arrives to a ruined Rotarl, Arcia tells Sieg she will search for survivors and that he should go after Delacroix. After fighting his way through the city streets, Sieg arrives at St. Claire's Cathedral, where more monsters wait for him. After defeating countless foes, Sieg arrives at the Hall of Chaos. After Sieg has a short talk with Delacroix, Arcia appears at the hall, saying that Delacroix won't get anywhere living in thew past. Victor then uses his telekinesis to make the maiden of silver shoot herself. Enraged, Sieg attacks Delacroix, defeating him. With the darkness within him weakened, Victor remembers what really happened years ago and, realizing he was the one to kill Siela, drops himself into chaos, fusing to the spirit of his deceased lover. After this, a new enemy appears: Azrail. After the defeat of the dark spirit, the combination of Siela and Delacroix manifests, and after a long fight, Sieg is able to destroy it in a flash of light. Inside the light, Sieg has a conversation with Siela in an imaginary field, where she, along with Delacroix, says goodbye to the Legionator]] as they go to the Celestial World. Back in Rotarl, Sieg and Arcia meet at Victor and Siela's "grave".

As a Legionator, Sieg can summon the seven Legions of Chaos to aid him in battle. Apart from this, he is a well trained knight of the order, having enhanced reflexes and being able to release lightning from his left gauntlet, which serves as a marker in the game and may paralyze average enemies. He also owns a customized claymore with magical power. 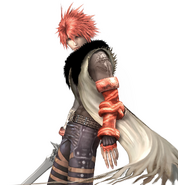 Onimusha: Dawn of Dreams Tenkai alternate costume
Add a photo to this gallery
Retrieved from "https://capcom.fandom.com/wiki/Sieg_Wahrheit?oldid=129493"
Community content is available under CC-BY-SA unless otherwise noted.