Shoei Okano is a professional artist who has worked for Capcom for a number of years, creating some of their finest character and promotional art. He began his career as a freelance artist, before doing some poster art for Konami. In the late 80's, he came to prominence (along with Akiman, Kinu Nishimura and SENSEI) with his illustrations for Street Fighter II, which was a major success at the time. As of 2004, he is head of the Design Team department.

His work has often been attributed to other artists, seeing as how his style changed over time.

Capcom vs. SNK (composite with many artists) 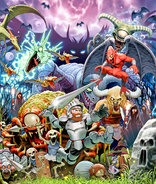 Japanese cover art for Ultimate Ghosts 'n Goblins, made by both Shoei and Shinkiro.
Community content is available under CC-BY-SA unless otherwise noted.
Advertisement