Toshiaki Mori, better known by his pen name Shinkiro (森気楼) (born December 14, 1962), is a Japanese illustrator and conceptual artist currently employed by Capcom. Shinkiro's art style is well known among fans and the gaming community for his realistic take on character designs, due to his use of shading and lighting, rather than an animated approach commonly seen in manga or anime.

Prior to joining Capcom, Shinkiro was employed by SNK, where he provided the character designs and cover illustrations for their most popular franchises, including The King of Fighters and Metal Slug. In 2000, Shinkiro was laid off due to SNK's bankruptcy, some time after that he was offered a job by Capcom.

At Capcom, Shinkiro has done several cover artworks and character designs for games, including Dino Stalker, God Hand, Dead Rising and Bionic Commando Rearmed. He has also done covers for American comics such as Spider-Man: Unlimited and UDON's Street Fighter comic series. Shinkiro also enjoyed success as the main illustrator of Tatsunoko vs. Capcom and Marvel vs. Capcom 3.

Rebecca watching the ruins of the Umbrella Executive Training Center from afar on July 23, 1998.

Wesker seen from behind. 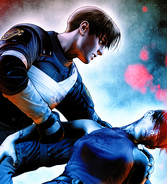 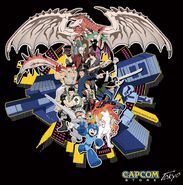