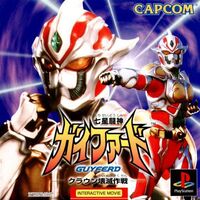 The game is an interactive movie. The player navigates through a maze and solves mysteries while collecting items and battling members of Crown. Battles are RPG-like, with a card of the player and the enemy fighting. The player can improve his stats with chips.

Retrieved from "https://capcom.fandom.com/wiki/Shichisei_T%C5%8Dshin_Guyferd:_Crown_Kaimetsu_Sakusen?oldid=130531"
Community content is available under CC-BY-SA unless otherwise noted.