Sheng Long (シェンロン, Shenron?) is a hoax character once thought to appear in the original Street Fighter II fighting game. He is regarded as the most famous character hoax not only in the history of Street Fighter, but in all of fighting games. The name "Sheng Long" was based on a mistranslation of "Shoryuken", found in one of Ryu's early victory quotes, "You must defeat Sheng Long to stand a chance". The large amount of fans questioning the quote lead to a rumor spread by Electronic Gaming Monthly (EGM) that Sheng Long was actually a secret boss character fought under extreme conditions. The whole hoax would become one of the most famous hoaxes and video game legends in gaming history, spreading globally.

The name Sheng Long comes from a mistranslated portion of Ryu's Shoryuken; "shō ryū" (昇 龍, "rising dragon") from Shōryūken (昇龍拳, "Rising Dragon Fist"), Ryu's flying uppercut, is "shēng lóng" in Chinese pinyin. This was carried into one of Ryu's quotes to defeated opponents in the English localization of the 1991 arcade fighting game Street Fighter II, changing the Japanese quote, "If you cannot overcome the Rising Dragon Fist, you cannot win!" (昇龍拳を破らぬ限り、おまえに勝ち目はない, Shōryūken wo yaburanu kagiri, omae ni kachime wa nai!?) to "You must defeat Sheng Long to stand a chance". As a result players were given the impression that Ryu was referring to an actual person instead of the physical attack itself.

The Super Nintendo (SNES) port of Street Fighter II released shortly after the April Fool prank changed the translation to "You must defeat my Dragon Punch to stand a chance." However, the English instruction manual for the SNES Street Fighter II referred to "Master Sheng Long" as Ryu and Ken's teacher. Instruction manuals for later ports to the SNES and Sega Mega Drive consoles replaced all references to Sheng Long by referring to Ryu and Ken as "disciples of Shotokan Karate".

EGM first started the Sheng Long rumor with a hoax article (pictured), revealing the rumored method to access him. He is described to have over-the-top powers, with fireballs faster than Sagat's Tiger Shot, and a spinning kick deadlier than Chun-Li's Spinning Bird Kick, also with the special attack of each fighter and "mega-damage" attack. He was also said to possess an air throw and have a Shoryuken engulfed in flames.

The method described was as follows: playing only as Ryu, the player cannot take a single hit until M. Bison's stage. Then, the player must not hit M. Bison or allow him to land a hit for ten rounds straight. Afterwards, Sheng Long would appear to throw Bison off the stage and face Ryu. When facing Sheng Long, the timer will freeze at 99, leaving a full "fight to the death". This directly inspired Akuma's entry sequence in Super Street Fighter II Turbo, where Akuma comes on the stage and performs the Shun Goku Satsu on M. Bison.

Around the release of Street Fighter III: New Generation, EGM later revived this rumor with an issue in 1997, where they actually gave him a defined appearance and design, and further explained his backstory. However, the method to get him was obscured after "Getting 6 perfects". His fighting style included an air version of Akuma's Shakunetsu Hadoken that knocked his opponent down, a double ground high-low Hadoken, an unblockable Denjin-Shinryuu-Ken (電刃神龍拳, Denjin Shinryūken?, "Electric Blade Divine Dragon Fist") Super Art that would shock the opponent, an air rapid Hadoken super attack akin to Ibuki's Kasumi Suzaku, and a third super attack intended to be a stronger version of Akuma's Shun Goku Satsu.

Sheng Long is mentioned three times in the 1995 arcade game Street Fighter: The Movie in the endings for Ryu, Ken and Akuma. In each of the endings he is stated as Akuma's brother and the master of Ryu and Ken, but never stated as dead. Despite the repeated mention, Sheng Long does not appear in the game. On January 30, 2007 the game's designer, Alan Noon, appeared on Shoryuken.com's forum and discussed aspects of the game cut during development, among them a playable Sheng Long character.

According to Noon, while shooting and digitizing the character images for the game, talk had circulated about adding extra characters that were not in the film. As the Sheng Long hoax and Akuma's debut in Super Street Fighter II Turbo were fairly recent at the time, the designers asked for Capcom's permission to add both characters into the game. Capcom approved the addition of Akuma, but denied the inclusion of Sheng Long.

However, during the digitization sessions for Akuma, Capcom unexpectedly approved the addition of Sheng Long; Noon stated that Capcom felt the character's inclusion was a necessity for the game's success. Noon designed Sheng Long's appearance, giving him a "mandarin style" gi and one hand taking the form of a dragon's claw, described as a result of his power being so great that he began to physically transform into a dragon. Capcom approved the design, and an artist from the development team posed as Sheng Long. However, the character was left unfinished because of time constraints.[3]

In an interview in the January 2008 issue of Electronic Gaming Monthly, Street Fighter IV producer Yoshinori Ono stated; "Let's just say that [jokes] that your magazine have reported in the past might find their way into the game as fan service." Executive editor Shane Bettenhausen took this to mean the appearance of Sheng Long in Street Fighter IV, though added that if the character did appear in the game, it would be Gouken. When asked in a later interview by 1UP.com regarding the possibility of Sheng Long's appearance in the title, Ono replied "Are you coming to the Tokyo Game Show? How about you ask me that question again then." Capcom later revealed Gouken as a character in Street Fighter IV, with Ono stating in an interview with Play magazine that his inclusion in the title was in response to fans requesting Sheng Long's presence in the game. Players can also unlock the title "AKA Sheng Long" for their calling card by using Gouken.

On April 1, 2008, Capcom announced Sheng Long as a "secret, unlock-able character" in their Japanese development blog for Street Fighter IV and later posted in their official US blog accompanied with a silhouette of the character. The post took the tone of a Capcom PR representative trying to announce a character without giving away too many details, hinting that "Sheng Long is Ryu's..." then holding back and saying to wait for an official character announcement. Similar to the original EGM joke, the post lists the method to unlock him as requiring the player to win every round as Ryu without taking any damage whatsoever and then perform his "Shoryuken" move during the final boss fight. Reception to the joke the third time was negative, and included criticism from 1UP.com. The following day, the Japanese website confirmed that it was indeed a joke, and explained the origin of Sheng Long while adding "Sheng-Long is still now and always will be, truly a character of legend".

On 28th March 2017, twenty-five years after the EGM article was published, Sheng Long was given a "joke" profile in the Shadaloo C.R.I., part of the Capcom Fighters Network website. The profile satirizes the Sheng Long rumor, stating that he became a living legend, he appears after consecutive draw games, his moves are impossible to counterattack and always register as counter hits, and that anyone that sees him will die after twenty-four hours.

In keeping with tradition, the profile also lists an exaggerated moveset for him. Apart from the Hadoken (which he performs with one hand), Shoryuken (which he can also do in mid-air) and Tatsumaki Senpukyaku, he can also use the Hell's Somersault Throw (地獄巴投げ, Jigoku Tomoenage?), a throw that instantly defeats his opponent, Unlimited Coins (連弧院, Renkoin?), an ability that allows him to resurrect himself indefinitely, Bags of Tea (堕伊般, Daihan?), which makes his opponent very angry, and a "Critical Art", the Rei-In-Bou (零印棒, Rei In Bō?), which lets him change into different characters. The latter move seems to also poke fun at the many unofficial hacks of Street Fighter II': Champion Edition, most notably Street Fighter II': Rainbow Edition.[4]

Additionally, the background is different from other profiles, it has the word "uso" (meaning "lie" in Japanese) in it and the profile is also said to be the "800th" (which is not the case).

YOU MUST DEFEAT MY DRAGON PUNCH!!!! 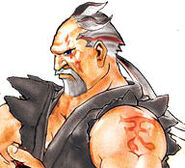 Sheng Long has the Akuma logo tattooed on his arm

The Sheng Long EGM article from 1997

Retrieved from "https://capcom.fandom.com/wiki/Sheng_Long?oldid=136951"
Community content is available under CC-BY-SA unless otherwise noted.