Shannon is a character from the 3D action comedy beat 'em up game God Hand where she is one of the antagonists.

The life of the party, this ravishing hedonist hides cold, cruel instincts. In the pursuit of satisfying her own hunger for pleasure, no sacrifice is too much. She see Gene as an object of desire, wanting him for herself. Fights with a fairy wand that shoots energy blasts and heart-shaped energy balls that temporarily turn Gene into a harmless Chihuahua while she kicks him. Her demon form is a cyclopean female form, melded with a four-legged monster with a mouth like a Predator and a single eye on its rear. She is eventually beaten to death by angry peasants with folding fans that she previously enslaved.

Appears as a coquettish, lithe female in an outrageous maroon and yellow outfit, with candystriped horns and green tattoos. 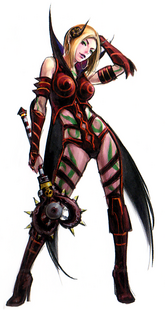