Shadow Red is a character from the Tech Romancer mecha fighting game. He pilots the Gourai.

Seemingly one of Goldibus' generals, pilot Shadow Red has an agenda of his own. In reality, he is Mamoru Todoroki, the father of Junpei. 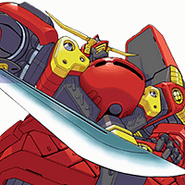 Shadow Red's mecha, Gourai.
Add a photo to this gallery
Retrieved from "https://capcom.fandom.com/wiki/Shadow_Red?oldid=118622"
Community content is available under CC-BY-SA unless otherwise noted.