A very stealthy and powerful ninja-themed Robot Master created by Dr. Wily, Shadow Man has even been nicknamed "the Menace of Mega Man 3" by some fans. Dr. Wily built him a giant frog robot that he can ride on (a reference to the association of ninjas with frogs). He is a master of ninjitsu, and guards his fortress well. Unlike most Robot Masters, Shadowman was not built by Dr. Wily, but was origin was unknown and is believed to be alien off origin, the only known fact is that he was remolded into his current form.

In most games, Shadow Man attacks by jumping, throwing Shadow Blades, and sliding.

He can use the Kawarimi no Jutsu (a ninja technique that replaces the body of the user by an object, normally a piece of wood) as a defense.

In Mega Man 2: The Power Fighters, he can use makibishis, and summon a giant frog (possibly a Croaker) that attacks with its tongue, a flamethrower (Shadow Man says "Katon no Jutsu" just before this attack), and spits a variation of Mecha Kero. 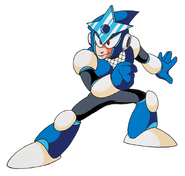 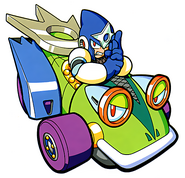 Shadow Man in his Shinobi Master in Mega Man Battle & Chase
Add a photo to this gallery
Retrieved from "https://capcom.fandom.com/wiki/Shadow_Man?oldid=124939"
Community content is available under CC-BY-SA unless otherwise noted.