Eichmann (before the "Super Soldier" experiment)

Earth Forces (after recovering his memories)

Shade is a character from the fighting game Cyberbots: Fullmetal Madness.

The sinister Earth Force began something similar to a "super soldier" experiment. They needed someone who was strong and young. A experienced soldier called Eichmann, from Germany, ended up being their candidate. They strove to create the perfect soldier but they needed to see if they had complete control over him, so they made him kill everyone in his unit, including his formerly best friend Ken Saotome. Earth Force writes the incident off as an accident.

Now named "SHADE", he became a cyborg and attack dog for the Earth Force. His memories were a little scrambled and he tried to remember who he was. Jin's last name, Saotome, is the first thing to jar his memory, since it is later revealed that he fought and killed Jin's father, though didn't want to. He became delusional at one point, confusing Jin with Ken, his father. In the end, in Jin's ending, he died saving Earth, doing one last favor for his old friend.

In his extended story mode, from console versions, Shade dies in a self-destruction after a last match against Jin.

In the game, Shade pilots the UVA-02 HELION mech. 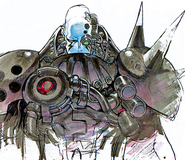 The UVA-02 HELION
Add a photo to this gallery
Retrieved from "https://capcom.fandom.com/wiki/Shade?oldid=136739"
Community content is available under CC-BY-SA unless otherwise noted.