Ageless (Seth is not a biological organism)

Seth, "The Puppet Master", is the boss of Shadaloo's weapons division, S.I.N.. Their body has been modified using cutting-edge technology. In Juri's ending in Super Street Fighter IV, moments before she destroys them for trying to rule the world, it is revealed that they are one of many genetically engineered replacement bodies for M. Bison.

Bearing chrome skin and an extremely muscular physique, Seth is a synthetic android. Around their abdomen and enclosed inside a pattern consisting of the Eight Trigrams of Taoist cosmology is an exposed area, which contains a rotating yin-yang sphere. This sphere, which they call the Tanden Engine, appears to be the source of their power, where it copies and translates the data from Seth's opponents, and allows them to mimic the special techniques of other fighters, such as Ken's Shoryuken, Guile's Sonic Boom, and Dhalsim's unique ability to stretch his limbs. When Seth uses their Tanden Engine, their skin color changes and their eyes turn black.

Seth, unlike Bison himself, is somewhat calm and concise, as they only display very little arrogance, usually in their annoying-by-design tendency to laugh and gloat when pulling off their moves. However, they can be just as ruthless and as evil as Bison himself and will not tell all of his plans to even his own workers such as Juri, they told nothing about Ryu to her.

Seth is the 15th of 26 enhanced beings that use data collected from the world warriors to create a style of mixed martial arts. Seth claims to be superior as a result of his humanity while the others are merely puppets. His storyline indicates that he plans to control the remnants of Shadaloo through S.I.N after Bison's apparent death at the hands of Akuma in Super Street Fighter II Turbo. He also attempts to manipulate Juri Han, a woman who possesses the Feng Shui Engine he created. She confronts him and unexpectedly offers to work for him, to which he agrees.

He hosts a World Warrior tournament in hopes of luring Ryu to complete his BLECE project to make S.I.N more powerful but is dismayed at reports that Bison has once again returned from death. Bison finally encounters Seth and defeats him in combat, and afterwards tells him that in fact everything that has happened has gone according to Bison's plan. After Bison leaves, Juri tells Seth that she intentionally pitted the two against each other, but is disappointed that Seth was not more of a challenge for Bison. Afterwards, Ryu would encounter another Seth and defeat him and destroy the BLECE machine. Bison commands the remaining copies of Seth and they wreak havoc on the fighters in and around the S.I.N. compound, as many of the characters' endings depict them defeating a version of Seth.

Seth appear in UDON's Street Fighter IV comic which focus on the game's newcomers (himself included).

Seth can be considered to be one of the more formidable bosses to appear in the Street Fighter franchise. His normal techniques are similar to Urien's and Gill's from Street Fighter III, but he is also able to mimic the abilities of some of the most powerful fighters, such as Ken, Chun-Li and Guile, among others. He possesses a metamorphic body of sorts, being able to stretch his arms like Dhalsim, as well as teleport like him. His unique ability seems to center around space, as he is able to suck in opponents from afar and damage them afterwards. When using this ability, his body turns black temporarily.

It's notable that Seth's attack and defense are increased when fighting him in Arcade Mode. When the player actually uses him, his abilities are more balanced. His unlockable version has the lowest defense of any character, and the lowest damaging Ultra. 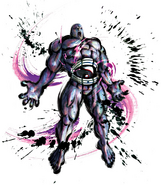 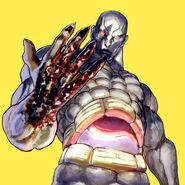