Sengoku BASARA X (pronounced "Sengoku-Basara-Cross") is a spin-off game in the Sengoku BASARA series of historical fantasy-themed tactical action games. It is a 2D fighting game, developed collaboratively by Arc System Works and Capcom, and published by the latter. It features graphics similar to the Guilty Gear series (which is developed by Arc System Works). There are twelve characters and each character has one or two partners/assist characters that assist them in battle. The game was released in 2008 exclusively in Japan, first for arcades and later ported to the PlayStation 2.

The Engun System allows for each character to call upon an assist fighter to aid him on attack, defense or during a special move. They can only be called when a dedicated bar is filled and when their level is high enough.

The Engun Level goes from 00 up to 99 as the time passes during the Round, and the higher the Level the stronger its ability becomes. Each fighter has its own Engun character and this cannot be changed.

Japan box
Add a photo to this gallery 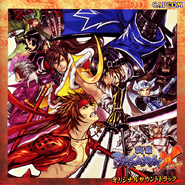