Sengoku BASARA: The Last Party (戦国BASARA：最後のパーティー Sengoku Basara: Saigo no pātī) is an anime film based on Capcom's Sengoku BASARA series. The film was released on June 4, 2011. It was produced by Production I.G and is set after the second season epilogue of the Sengoku BASARA anime series. 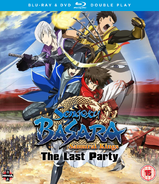 Blu-ray box art.
Add a photo to this gallery

Retrieved from "https://capcom.fandom.com/wiki/Sengoku_BASARA:_The_Last_Party?oldid=126010"
Community content is available under CC-BY-SA unless otherwise noted.