Capcom Database
Register
Don't have an account?
Sign In
Advertisement
in: Games, Shoot 'em up Games, Shooter Games,
and 6 more

Section Z is a arcade 2D side-view shoot-'em-up game developed by Capcom and released in 1985. The game is also included in Capcom Classics Collection for PlayStation 2 and Xbox.

The more well-known NES version (starring Captain Commando, though in name only) was later released in the United States on July 1, 1987, in the Europe on September 27, 1989 and for the Famicom Disk System in Japan on May 25, 1987.

The player maneuvers the space ranger throughout the enemy space station, which consists of 26 alphabetically ordered corridors known as "sections", starting from Section A and ending at the titular Section Z. The game is divided into five stages, each consisting of five sections (with the final stage having six sections to accommodate the spare letter). The player will fight an enemy boss at the end of each stage, concluding with the final battle against the "L Brain" at Section Z. The game's stages alternates between horizontal-scrolling stage (left or right) and upwards vertical-scrolling stages. The player will lose a life every time they get hit by enemy fire. Additional lives can be obtained if the player achieves a high enough score. The game will be over if the player loses all of their lives, although a chance to continue will be provided.

The controls consists of an eight-way joystick and two buttons, one for shooting and the other for changing the character's aim to the left or right. This allows the player to shoot at one direction while moving away towards the opposite. The player will shoot their rifle towards the left or the right with the fire button, while dropping bombs at the same time to the ground. By destroying certain dome-shaped containers, the player can obtain one of three power-up items represented by letters: S, P, and B. S increases the player's mobility speed, while P increases their firing power; each can improved for up to three increments. However, these power-ups will be lost whenever the player loses a life. The B item will simply give the player bonus points.

Differences between the Arcade version and NES version

Many of Capcom's arcade "ports" for the NES were often two completely different games. Section Z is no exception. The arcade version (the first in a trio of "jetpack shooters") features a two-player alternating mode that is missing from the NES home version, but lacks the branching level design of the later iteration. The arcade version has the player moving in a linear path of 26 "sections" each named after a letter of the English alphabet (with "Section Z" being the final stage). Considering that the game had to be played with quarters with the player standing the entire time, it is also significantly shorter. Additionally, "Captain Commando" only applies to the NES version; the player character in the arcade and Famicom versions is known only as Lonely Astronaut.

"It is now the 21st Century. High-frequency radio and television communications between Planet Earth and the space-exploring Saturn Space Station blast warnings of approaching invaders, then abruptly cease."

"You shed your earthly identity to become the one remaining astronaut in space. You unite with freedom-fighter Captain Commando to enter the outer regions of space. Concealed in a special solar-energized, jet-propelled supersonic spacesuit, and armed with multi-directional weaponry, you depart Earth's surface on a death-defying mission."

"You and Captain Commando must maneuver safely through four levels of adventurous battle scenes, penetrating the defenses established by the Space Soldiers of Balangool. You are challenged as you fight through Sections A to Section Z - where "L-Brain", Balangool's Master Control, programs domination of the universe."

"L-Brain, Master Control of Balangool, secured in Section Z of Fortress Balangool, headquarters of this brutal enemy force, transmits communiqués throughout the universe. Balangool Space Soldiers receive instructions from L-Brain while engaged in interplanetary invasions. Their goal is to conquer the universe."

"Balangool Captains are stationed at each stage, guarding giant super powered transmitters. Strong, red barriers surround two transmitters found at Stage One. To clear these red barriers you must destroy the Enemy Generator supplying power to the barriers. Should you successfully eliminate the generator, proceed to eradicate the Balangool Captain. For only then can you proceed to another Stage."

"As you progress, increase your supply of weapons and energy. Without them, you cannot reach Section Z to bring L-Brain Master Control to extinction, heroically saving Planet Earth". 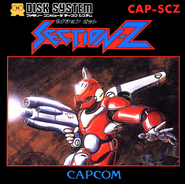