Losing, being compared to Dan[2], his older sister (due to being afraid of her)[1]

Sean (ショーン・マツダ, Shōn?), also known by his full name Sean Matsuda (ショーン・マツダ/松田, Shōn Matsuda?), is a character from the Street Fighter series of fighting games. He first appeared in Street Fighter III: New Generation. He is a confident amateur martial artist from Brazil who idolizes Ken, eventually becoming his disciple, and the younger brother of Laura, a newcomer who appears in Street Fighter V.

In the Street Fighter III games, Sean wears a yellow gi similar to those worn by Ryu and Ken with the sleeves removed at the shoulders, and red fighting gloves. He wears a black belt and fights barefoot. He is a dark-skinned Brazilian and has black dreadlocks with the sides shaved off and usually brings a basketball with him everywhere.

In Street Fighter V, he wears a modern outfit consisting of a yellow hoodie jacket with the sign of "S" at the center, black outlines in each sides of his sleeves, yellow jogging pants, his signature red sparring gloves and red sneakers with two white linings. He also has a bandage on his nose. In A Shadow Falls, Sean's dreadlocks are grown into shoulder length. He wears a yellow sleeveless hoodie with a black short sleeve fitted shirt, blue baggy jean shorts with a brown belt to his waist and white sneakers.

Sean is eager to prove himself as a strong fighter, and hates being referred to as weak. He often makes a point of bringing up Dan as a shining example of weakness and thus someone he hates being compared to.

He is also a huge fan of Ken Masters, and wishes to learn from him in hopes of becoming a better person. Additionally, Sean reads a magazine named "Masters Online Karate" at the time of Street Fighter V. Sean is also somewhat afraid of his older sister Laura.

Sean Matsuda, his sister Laura, and brother Fabio were born in Brazil, though their father (Yuichiro Matsuda) and paternal grandfather (Kinjiro Matsuda) were Japanese (hence the surname). The siblings' mother Brenda is Brazilian and Sean has two maternal cousins (Enzo and Manuela Da Silva) who practice capoeira.

A keen basketball player, his main pastime is martial arts. At some point, Sean saw veteran World Warrior Ken Masters in action at the U.S. Martial Arts Tournament and swore to become his pupil. While Laura was trained by Kinjiro in the art of the family's Matsuda Jiu-Jitsu, its currently unknown if Sean was ever trained by their grandfather before he left to find Ken.

At the beginning of Laura's character story, she teases Sean a little before leaving their house in order to find strong fighters and promote the art of Matsuda Jiu-Jitsu. At the end, Sean, who is still in Brazil, is wondering where Laura is.

In A Shadow Falls, Sean was playing Mega Man with his portable video game, the CPSP, until the signal was jammed because of the moon at the sky. Sean notices Laura has one of the chess pieces like the other fighters.

Sean was later confronted by F.A.N.G who demanded for knowledge of the chess piece's whereabouts, Sean was however saved by Ken who was there along with Chun-Li and Cammy. Chun-Li, who seem to recognize Sean as one of the Matsuda family, asks Sean if he knows that his sister carries the chess piece until Laura arrives and happily grabs him in a headlock, thinking he has a girlfriend. After Laura fights Ken, who she mistakes as a enemy, Sean corrects his sister, saying that Ken and the others are not their enemy. Sean is last seen watching his sister join with Ken and the others to stop Shadaloo and their plans.

After repeated unsuccessful attempts to get Ken to train him, Sean enters the World Warrior tournament to prove that he is a worthy student, but is again unsuccessful - and in fact defeated by Ken himself. After beating Sean, Ken (finding Sean to be a nuisance) instructs him to search for Ryu and not return until he has found and defeated him. Sean finds Ryu and challenges him to a fight, but is defeated time and time again no matter how hard he tries - to the point of severe injury when Ryu hits him with just a simple Hadoken. After recovering from his injuries, he spends an entire year training alone.

Sean then sets off for the U.S Martial Arts tournament to prove that he has become a much greater student since his last meeting with Ken. In his ending, Sean wins the U.S. Martial Arts tournament but it turns out to be a dream, in reality, Sean lost to a random fighter during the qualifying rounds. Ken tells him that he did not train himself properly and gives him advice to train harder next time. Ken decides to take revenge against his opponents in the tournament by winning the next one. Sean becomes dismayed but states that he will win someday.

After Ken wins the tournament, Sean declines Ken's offer of the championship trophy in acknowledgment of how well he had done, insisting that he will win it himself some day.

Sean appeared along with Ken in Ryu's pre-fight introduction, as well as his ending.

Sean made a cameo appearance in Pyron's CFE ending and in the New York stage as well.

Sean is the protagonist in UDON's Super Street Fighter: New Generations Vol. 2's story arc Hong Kong Hustle. Here he fights a group of thugs while attempting to save who he thought was a helpless woman, but turned out to be Chun-Li. Chun-Li finishes the thugs off for Sean while Ken Masters appears to inform Sean just who she is. She leaves saying that she's sure Sean would 'make his master proud' while Ken and Sean share a moment over the exciting streets of Hong Kong.

Sean also makes another prominent appearance in the Street Fighter V Free Comic Book Day comic. In this short story, Sean fights his sister Laura in the Brazilian Regional Jujitsu Finals. He accuses her of not using Matsuda Jujitsu when she uses her Volty Line move in which Laura tells him that he needs to break away from fighting just like their grandpa taught him, and try to incorporate new techniques into the foundation he has. Laura wins the match and Sean leaves dejected. However in one of the back rooms he catches sight of Ken Masters winning a tournament and vows that he'll beat Laura using 'Ken Masters' style.

Sean practices the same fighting style as Ryu and Ken; however, due to his inexperience, there are notable differences between his moves and theirs. He even shares different moves than his family's "Matsuda Jiu-Jitsu".

The most notable difference is his projectile (Hado Burst), which is only available to Sean as a Super Art. His Shoryuken works much the same way; while he does have a two-handed version of the move, he only performs the "true" Shoryuken in yet another of his Super Arts, which more closely resembles the Shoryureppa. This seems to imply that Sean can only use Ken's techniques properly with extreme focus. His third Super Art is the Hyper Tornado.

Sean performs his version of the Tatsumaki with both legs, similar to Dan and his Dankukyaku. He also possess moves somewhat unique to him: an overhead wheel kick and a rushing tackle. He is also able to shoot a basketball and use it as a special move like a Hadoken, however, it doesn't do much damage.

In 2nd Impact, Sean was a lot easier to use and the best choice because of his high damage. Sean can link/combo his Super Arts after some of his special moves, though it will do less damage. His Ryuubi Kyaku has a big pause, making it easy to parry, but it is good for countering fire balls. His Tornado is easy to combo, and his Dragon Smash is a high-damage and high-priority two hit anti-air uppercut.

In 3rd Strike, some of his moves, most notably his Dragon Smash, were toned down in effectiveness and damage, although his Ryuubi Kyaku no longer pauses before execution. Sean was also given many new standard attacks, and two of his special moves were changed to feature all-new animation frames. Sean is often referred to as the "Dan" of Street Fighter III: 3rd Strike; far from an intentional joke character, he is still difficult to use effectively, due to a lack of safe options. 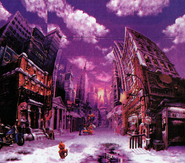