A green-skinned cone-headed alien who is named after the planet where he comes from in the Andromeda Galaxy of the universe (but not the one present in Earth's Solar System) and fights with Plasma Yo-Yos, while having quite an eccentric yet friendly personality towards those who meet him. Saturn is the comic of the heroes, with a clown-like attitude and a perennial ten-mile-wide smile on his face.

The people of Saturn have long been technologically advanced, having long ago been one of the many pilots of visiting UFOs sighted on Earth in the 20th Century, and are long lived creatures with lifespans greater than that of humans. Saturn himself was originally a cadet of his home planet's research institution who aspired to work in the institute's advanced remote computer planet relay analysis system, but was regulated to manual research and exploration, which he came to find lacking and a meager grind.

On another day on the job of traveling to remote galaxies and studying lifeforms on other planets, Saturn was assigned to planet Earth for a maintenance check in its 24th Century. At first bored of this job, Saturn was immediately inspired and awed upon picking up feeds of street performers and entertainers that wowed crowds and performed amazing feats of skill. There were even times that he would accidentally lose track of time and be absent from work, having brought the recordings home to simply watch and be entranced by the sights of life on Earth. One of his most favorite scenes were that of a feed from Paris at the Centre Georges Pompidou regarding the history of the yo yo and its performance tricks.

Back at home, however, his colleagues had long disdained the idea as life as an entertainer, regarding such a life as a waste of talent and time. Saturn, however, was ecstatic--life on Earth a breeze of fresh air to him and an exciting place to truly explore. He, too, wanted to walk the path of an entertainer, in one instance having even going as far as even making his own yo yos and steadily mastering the tricks he saw. Having learned that Earth had just begun to master the art of space travel, Saturn had pitched to his superiors a voyage to the planet to establish diplomatic relations and a warm welcome from the Andromedean Saturnanians. Winning the permission to do so, Saturn and an expedition team left immediately to the blue planet.

As his team made it to Earth, they were directed to a base on the moon by the Earth Federation. Although they came in peace, Earth Federation explained that their planet's situation was rather tense, and measures of safety were taken where only certain alien races were allowed a limited access due to past reoccurring tensions with belligerent and aggressive races. While Saturn was allowed further hands-on access to study the peculiarities of Earth culture, his hopes of visiting Earth itself was, as it looked, dashed. Melancholy, Saturn and his team were to disembark back home, until Saturn caught word of the rise of the Fourth Empire. Learning that the Empire also threatened universal domination upon its decimation of Earth, Saturn had decided to join Project Star Gladiator, to prove to Earth of his planet's camaraderie to their new allies and to protect the new world that inspired him so. 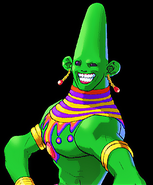