Capcom Database
Register
Don't have an account?
Sign In
Advertisement
in: Characters, Devil May Cry Characters, Bosses,
and 6 more

Sanctus is the high priest of the Order of the Sword. He is killed by Dante during the prologue, but he is resurrected through the Ascension ceremony. Unlike the other ascended knights, he initially retains his original form after the ceremony, while gaining incredible demonic power. He is sometimes shown wearing the armor of an Alto Angelo.

Sanctus originally planned to use Dante as the Savior's core, and had the Order take the Yamato and open the Hell Gates as a method of luring Dante to Fortuna. However, when Agnus reveals to the Order that Nero possesses demonic power, Sanctus orders him to kidnap Kyrie in order to lure Nero to the Savior and use him, instead. Though he is unable to convince Nero to be absorbed willingly, he is able to overpower him and absorb him anyway, in the process recovering the Yamato which Nero had taken. During the activation of the Savior he is also attacked by Credo, who considers Sanctus's exploitation of Kyrie to be a betrayal, but Sanctus murders him.

After Dante recovers the Yamato and destroys the true Hell Gate, he is confronted by Sanctus in Alto Angelo form. He destroys this demon, revealing it to be nothing more than an empty puppet, and proceeds to attack the Savior to get at the real Sanctus, who is his inside. While not able to enter himself, he is able to weaken the statue enough for Nero to escape, and returns the Yamato to him. Nero proceeds through the statue to the Sacred Heart, where he encounters Sanctus in his fully ascended form.

Sanctus Diabolica is the fully Ascended form of Sanctus. He is encountered by Nero within the Savior's Sacred Heart, during Mission 20: La Vita Nuova. In this form he is able to resonate with the sword of Sparda he wields, amplifying his power and warping his form into a hellish visage: horn-like appendages which sprout fiery wings, a jewel on his forehead resembling the Savior's, and the halo-like horns of Ascended demons.

After defeating this form of Sanctus, Nero is able to rescue Kyrie and escape from the Savior. As they return to town, the Savior reawakens as the False Savior by merging with Sanctus's remains, and taking on his face. However, it is much weaker than it was earlier, and Nero is able to easily overpower it using his Devil Bringer. 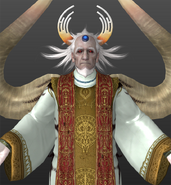