Self-taught techniques based on Ryu's fighting style
Sakura (春日野 さくら, Kasugano Sakura) is a character in the Street Fighter games. She is a 16-year-old (as of Street Fighter Alpha 3) Japanese schoolgirl who has an intense fascination with Ryu. She has managed to copy and learn some of Ryu's techniques, but really wants him to train her personally.

Sakura Kasugano typically fights in her school uniform, a short-skirted sailor fuku (serafuku) with the collar popped and red bloomers underneath. She wears a red top under her uniform, sparring gloves, a white headband and a pair of red sneakers.

Sakura first appeared in Street Fighter Alpha 2, where she had begun to participate in street fighting after watching Ryu win the first World Warrior tournament. She was searching for him, and wished for him to train her to be a better fighter. She met up with many interesting people along the way, and eventually came across Ryu, who was still distressed over the Satsui no Hadou that had corrupted him. He told her he could not train her, as he still had much to learn himself. He sparred with her for a bit and, as he began to leave, she took a picture of him to remember him by.

She was still fighting in Street Fighter Alpha 3, and decided to travel the world to find Ryu. She started off in her native Japan and fought the sumo wrestler E. Honda, who mentioned Ryu was going off to such places as India and Thailand. She also fought a rematch with her rich rival Karin Kanzuki, and though Karin won the fight, she admitted Sakura was the much better fighter and had learned winning was not everything as her father had taught her. Thereafter traveling with her self-proclaimed sensei, Dan, she met his friend Blanka along the way and was promised a match with him. She continued to search the world for Ryu, eventually ditching Dan and finding Ryu's friend and rival Ken. She commented to him how she loved to fight to better herself, and finding inspiration in those words himself, Ken and Sakura eventually found Ryu in Thailand, where he was being brainwashed by M. Bison. Sagat had arrived by this time, and as Sagat took on Ryu, both Ken and Sakura took on Bison. A combination of Sakura being hurt by Bison and Sagat's urgings finally snapped Ryu out of the mind control and he forced Bison to retreat. He told Sakura again that he was not ready to train her yet, and walked off, Sakura watching him go. She has a brother named Tsukushi and a friend named Kei, who attends the same high school and sometimes goes along on Sakura's street fighting tours.

She returns in Street Fighter IV, again searching for Ryu. This time, it is heavily implied that her admiration toward Ryu has developed into a full-on crush. Her win quote against Sagat has her admitting that she understands his obsession with Ryu, adding "isn't he just dreamy?" She also seems to have since become friends with Karin, texting her frequently to update her on Sakura's progress through the tournament. During the tournament, she actively seeks out Ryu, eventually finding him in the S.I.N. building. Sakura escapes with Ryu from the S.I.N. building and also sees Dan and Blanka along the way.

After the tournament, she and Ryu exchange goodbyes and Sakura leaves for home on the ship. Some time later, while out walking her dog, an older-looking Sakura sees Ryu approaching. What happens next is unknown.

Sakura made a cameo appearance in Rival Schools: United By Fate. She had no actual story show in single-player mode of the game, although she did have a proper ending after beating the final boss in the game. The in-game story established her as childhood friends with Hinata and Natsu. Chronologically, this takes place before she becomes involved in the events of Street Fighter Alpha 2.

After the battle with Cyber Akuma, Sakura got older and had a son. This ending is not considered canon to Sakura's story in the main Street Fighter series or other games she appears in.

Sakura fights in an emulated version of Ryu's fighting style. She can successfully manipulate ki and is subsequently able to perform the "Hadouken" energy attack (however, due to her lack of training, she cannot throw it the full length of the arena like Ken or Ryu can). Unlike Ryu and other warriors from the same style, however, she can control the size of her Hadouken and throw larger Hadouken projectiles that sacrifice range and execution speed for size (up to 3 times larger).

In the Marvel vs. Capcom series, she throws her Hadoukens diagonally upwards, though her "Hiyakeshita" (literally "Sunburned") version still throws them horizontally).

In Capcom vs. SNK, she is given an energy spark instead of a traditional projectile (called the "Hadoushou") that hits 3 times but is limited to the area in front of her hands (though her EX version lets her use her special version of the Hadouken). Her other attacks include "Shunpuu Kyaku", a short version of the "Tatsumaki Senpuu Kyaku" attack (instead of sailing through the air, Sakura's version rises then falls in an arcing pattern and traditionally only goes about 60% of the screen at its longest range) and "Shououken", a version of the "Shoryuken" that sees her running before executing the attack (weak version is very similar to a normal Shoryuken, but with an extended delay; when performed with the Fierce punch button, the attack can hit 6 times as she is running toward her opponent).

Her super attacks include her own interpretations of the "Shinkuu-Hadoken" (the Shinkuu-Hadoken, like her regular projectile, will not cover the full length of the screen) and "Shoryu-Reppa" ("Midare Zakura"). Her third super attack is a ground based spinning leg attack (called the "Haru Ichiban", literally translated as "first one of the spring") that ends with a side kick that knocks her opponent away.

In the Marvel vs. Capcom series (under her "Hiyakeshita Sakura" version), the Street Fighter EX series and Rival Schools she also gains the Shun Goku Satsu.

Her appearance in Street Fighter EX3 sees her gain two unique Meteor Combos: first is the "Nekkestsu Hadouken", in which she fires a massive, pink Hadouken, which is several times her size, exceptionally fast, and does more damage than any projectile attack in that game; the second is "Genki Ichiban", which can deal about 80% damage to an opponent but is widely telegraphed (she tiptoes toward her opponent and points & laughs; the pointing is unblockable and causes a great deal of knockback).

An "evil" version of Sakura called Sunburned Sakura (日焼けしたさくら Hiyakeshita Sakura; also known as Dark Sakura) is a secret playable in Marvel Super Heroes vs. Street Fighter. Unlike Ryu, who can't control the Satsui no Hadou, or Akuma, who has lost all of his compassion and humanity, Sakura is able to keep herself completely under control, retaining her personality and manners. 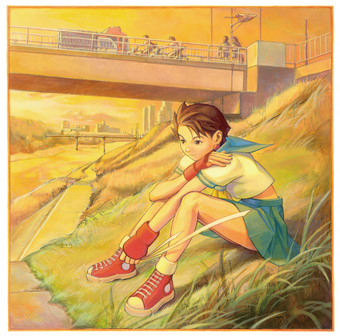 Retrieved from "https://capcom.fandom.com/wiki/Sakura?oldid=142026"
Community content is available under CC-BY-SA unless otherwise noted.