Capcom Database
Register
Don't have an account?
Sign In
Advertisement
in: Articles with insufficient citation, Series, Sub-Series,
and 2 more

The SNK vs. Capcom (or alternately Capcom vs. SNK) series is a collection of crossover fighting games by either Capcom or SNK featuring characters that appear in games created by both of these two companies.

The games in this series either contain SNK vs. Capcom or Capcom vs. SNK, the first company name (in these cases) denoting the company behind the game's development. The games developed by Capcom are part of their Versus series.

The supposed origin behind this series was an issue of the "Arcadia" magazine in which there were articles covering both The King of Fighters '98 and Street Fighter Alpha 3, both of which were released at around the same time. Readers had misread the cover, which said KOF vs. SF, suggesting that there was a fighting game that would pit characters from the Street Fighter and The King of Fighters series. Because of this uproar, Capcom and SNK supposedly signed a deal that would allow them to produce only two fighting games concerning both franchises in 1999 (the Card Fighters series were not fighting games and therefore were exempt from the rule).

It is possible that SNK vs. Capcom: SVC Chaos was made in order to fulfill the contract obligations[citation needed] that SNK made prior to the company filing bankruptcy and their eventual closing in 2000. If one company was the main developer of one game, the distributing company would gain the profits and not the company that licensed the characters for use. SNK gave the rights to use their characters to Capcom for the first Capcom vs. SNK game although SNK didn't profit from it.

There were interviews which SNK stated that it would be possible to renew their contract with Capcom to make new SNK vs. Capcom games[1] but in an another interview, both companies stated that they would not do any further collaboration with each other, SNK vs. Capcom: Card Fighters DS may possibly be the last crossover game between both companies.[2] However, in an interview from January 2009, Street Fighter producer Yoshinori Ono expressed interest in a possible third game if fans demand it.[3] In October 2012, Hideaki Itsuno hinted that the SNK vs. Capcom series (along with the Rival Schools series[citation needed]) may see a revival.[citation needed]

According to an interview with former The King of Fighters director Toyohisa Tanabe, Capcom vs. SNK 3 was actually in development, but ultimately cancelled, at some point. [4] The interview, originally shared on Capcom's Shadaloo C.R.I. website back in November 2017,[5] features Capcom developer Takayuki Nakayama speaking with Tanabe about the cancelled Capcom Fighting All Stars game. Tanabe mentions that he was brought in to lead the Capcom Fighting All Stars team after leaving SNK of employment in 2001 when it "fell apart for a number of reasons.", and notes that former Capcom director Yoshiki Okamoto was also working on an another fighting game (Capcom vs. SNK 3) at the time. Nakayama stated that he saw several designs and models of the game.

While no new SNK vs. Capcom titles have been released since Card Fighter DS, Akuma and Geese Howard both appeared as playable guest fighters in the 3D fighting game Tekken 7: Fated Retribution; while obviously not a SNK vs. Capcom game, it did mark the first time in ten years (after Card Fighter DS' release) SNK and Capcom's characters clashes. In addition, characters from both companies have since then appeared together in a handful of other titles, including Nintendo's Super Smash Bros. Ultimate.

SNK vs. Capcom: The Match of the Millennium 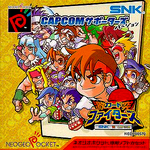