SNK vs. Capcom: The Match of the Millennium

The game offers solo one-on-one bouts, two-on-two tag team, and three-on-three teams akin to gameplay from The King of Fighters. After that, the player can choose either a Capcom-style level meter, an SNK-style charge meter, or a 'neutral' meter that enhances super attacks if full. Single-player mode has the player's selected character fight random opponents, with the fourth one being against their rival. The last two stages climaxes with a fight against the duo of M. Bison and Geese Howard, culminating with a fight against either Orochi Iori or Evil Ryu, depending on what side their character is on.

The game also boasts an "Olympic Mode" (hosted by Karin of the Capcom team or Rimururu of the SNK team), a collection of themed minigames, including a Dance Dance Revolution-style rhythm game starring Felicia, a FPS style-based game where the player must shoot the Mars People, or helping Arthur hop pits to snatch up treasure, as well as there being time-attack, first strike, and survival events. The players performance in these games earns them special vs. points which they can use to unlock a special attack for each character.

The game is capable of linking with such other games as the Card Fighters Clash series and even the Dreamcast version of Capcom vs. SNK, but the only purpose this serves is data transfer. The Japanese version could also transfer data to the Dreamcast port of The King of Fighters '98 for character points. 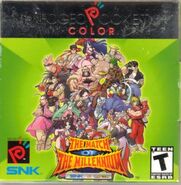 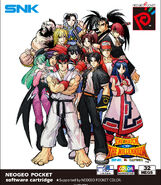