Part of the SNK vs. Capcom series, it is the second fighting game SNK developed after The Match of the Millennium and overall their fourth game within the series. The game was released for the Playstation 2 on December 25, 2003, and for Xbox on October 7, 2004. Promotional art was handled by SNK artists Nona, Falcoon and (now former SNK artist) Shinkiro. Nona did the main illustrations for the characters.

SNK vs. Capcom: SVC Chaos primarily utilizes the command system of The King of Fighters series, incorporating light/strong kicks, punches, cancels, and charging attacks. Unlike its Capcom-developed predecessor, Capcom vs. SNK 2, SVC Chaos features no air guards and has no "groove system", instead focusing on quicker gameplay. Characters are provided with a 3 bar system for executing special attacks on varying levels with filling options attributed to strikes and damage. Additionally, the sprites from the various series received new models and some special effects were changed in command lists.

To face a midboss in this game, the player can meet varying requirements to face them:

To face the secret bosses in this game, the player has to meet one of two varying requirements to face them. However, as a difficulty curve, the player has only one chance to defeat them. Failing to meet either requirement is the same result if the player loses to them, a text-only ending that states the player character was never seen again. 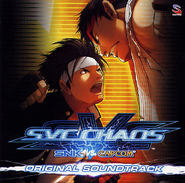 Japan Arcade Flyer
Add a photo to this gallery

Retrieved from "https://capcom.fandom.com/wiki/SNK_vs._Capcom:_SVC_Chaos?oldid=142088"
Community content is available under CC-BY-SA unless otherwise noted.