Sōrin Ōtomo is a character from the Sengoku BASARA series of action strategy games. He is the successor to Xavi and his element is light.

Sōrin is a young man spreading Xavism by preaching at every opportunity. He is verbally abusive to his retainer Muneshige Tachibana, but always calls for his help when in danger. On the battlefield, Sōrin rides on the Xavi Tank and gains more believers even while fighting.

Sōrin Ōtomo, also known as Yoshishige no Fujiwara and Yoshishige Ōtomo, was a Japanese feudal lord (daimyo) of the Ōtomo clan, one of the few to have converted to Christianity. The eldest son of Yoshiaki Ōtomo, he inherited the domain of Funai, on Kyūshū, Japan's southernmost main island, from his father. In 1562, Yoshishige adopted the name "Sanbisai Sōrin" upon becoming a Buddhist monk, but remains best known as Sōrin Ōtomo, despite having converted to Christianity under the baptismal name Francisco in 1578. He then turned against the Mōri and Shimazu clans, who dominated most of Kyūshū. He is perhaps most significant for having appealed to Hideyoshi Toyotomi to intervene in Kyūshū against the Shimazu, thus spurring Hideyoshi's Kyūshū Campaign of 1587. 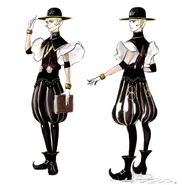 Sōrin's Xavi Tank
Add a photo to this gallery
Retrieved from "https://capcom.fandom.com/wiki/S%C5%8Drin_%C5%8Ctomo?oldid=137882"
Community content is available under CC-BY-SA unless otherwise noted.