Yuki Hideyasu, also known by his alias Sōki (蒼鬼, lit. "Pale Blue Demon"), is a character from the Onimusha series. He first appeared in Onimusha: Dawn of Dreams as the new protagonist, replacing Samanosuke, Jubei Yagyu and Jacques. He is roughly based on the historical figure, Hideyasu Yūki.

Yuki Hideyasu is a strong warrior who possesses the dark power of the Oni. He goes by many names besides Yuki, such as Soki, the Blue Demon, Oni of the Ash, and God of Darkness. Having learned about Hideyoshi's insidious scheme, he sets out on a journey to burn the Genma trees and defeat the Genma running rampant across the land.

Wielding two swords with grace, precision and power, Hideyasu is soon referred to by townsfolk as "Kaijin no Sōki" (灰燼の蒼鬼, "Pale Blue Demon of the Embers"), Oni of the Ash, due to his extreme resemblance to the Oni God. Sōki's travels are aided by a young creature by the name of Minokichi. He provides Sōki with instant "teleportation" travel, insight on the various creatures and places they traverse, and quips about the allies they eventually obtain. Sōki uses a variety of heavy broadswords and katanas.

Sōki appeared as a playable character in the crossover fighting game Tatsunoko vs. Capcom: Ultimate All-Stars. 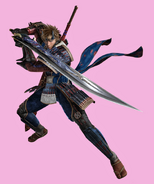 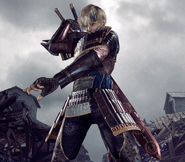 Alternate costume in Dawn of Dreams 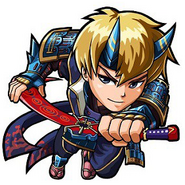 UMvC3 Heroes & Heralds Card
Add a photo to this gallery
Retrieved from "https://capcom.fandom.com/wiki/S%C5%8Dki?oldid=134934"
Community content is available under CC-BY-SA unless otherwise noted.