Rodrigo is the leader of the 3rd Security Unit of the Umbrella Corporation's Paris Lab Facility. Rodrigo is the one who captured Claire Redfield in 1998/1999 and took her to the Rockfort Island prison. He is actually a native of Rockfort Island himself, and lived there before Umbrella purchased the land and forced the villagers out of the island.

At the beginning of the first half of the game, he releases Claire from her cell, due to the viral outbreak affecting the island. The player has the option to return to the prison at a later point during Claire's half of the game, and provide Rodrigo with a hemostat for his injury. In doing so, Claire will exchange her lighter for a lockpick.

At the beginning of the second half of the game, Chris Redfield will meet a dying Rodrigo in the island's underground catacombs. Provided that Claire delivered the hemostat, Rodrigo will then return the lighter to Chris before a giant T-virus infected worm eats him whole. Although Chris attempts to save him by killing the Gulp Worm, and Rodrigo is spit out, the acid burns inflicted by the creature's stomach proved fatal.

Rodrigo was a good person at heart, and a man of conscience. When Rockfort first experienced the T-virus outbreak, Rodrigo was shocked at how quickly the monsters obliterated his squad. In hiding, he began to believe that all that was occurring was how it should be, and was what he and Umbrella deserved. Refusing to have Claire's blood on his hands, seeing how it was he who was responsible for her capture, he began to believe in Claire's cause to bring Umbrella to justice. Rodrigo also regretted ignoring his conscience while in service to Umbrella, all for his own greed and not caring how it affected others.

Rodrigo was deeply religious, refusing to turn to suicide while suffering serious pain from his injuries, but feared he was going to hell all the same. This changed when, in gratitude for freeing her, Claire returned to help with his injuries. In his final moments, Rodrigo believed Claire to be an angel (addressing her as such when he spoke to Chris) sent to comfort him in preparation for going to heaven. 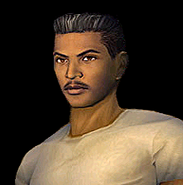