Rockman Strategy is a strategy game that was officially licensed by Capcom and created by Dreams Come True. It was released in 2001 in Taiwan for the PC. The game introduced a new character named Fan. It is considered part of the Mega Man Classic series.

It is the year 2016, shortly after the events of Rockman & Forte: Challenger From The Future. Just when everyone thought peace had finally settled on the world, a strange series of biological events started to occur. The world was shocked by a series of earthquakes and, concurrently, plants throughout the world began to die. As news reports began to flood televisions across the globe about these catastrophes, the infamous Dr. Wily made an appearance on TV, shocking the world. He announced that he was behind these events and that, unless the populace cooperate and give in to his demands, the world was doomed.

However, little did everyone know that Dr. Wily was being forced to cooperate with a group of invaders from space who called themselves the Constellation Droids. These powerful Robot Masters, all named after the twelve signs of the Zodiac (except for their leaders Luna and Apollo), had taken over Wily's lab and forced the evil scientist to cooperate with them under threat of death.

Dr. Light, renowned robotics engineer and pacifist, once again called on Mega Man to go after the powerful Constellation Droids and the evil Dr. Wily. However, Duo, a member of the Intergalactic Police Force who had helped Mega Man during the "evil energy crisis," returned to Earth to assist with the take-down of the Constellation Droids... 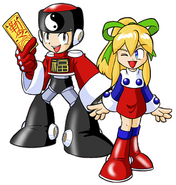 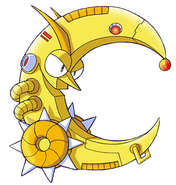