Guns, soccer, and anything else related to the sport

Roberto possesses a cool and shy side. Most of the time, he's a quiet loner. Nonetheless, he will not abandon anyone who is in need of help. Outside the soccer field, he's a cool guy, but becomes hot-blooded when inside it. He gives it his all whenever he makes the team's make-or-break shot.

His primary outfit is a long sleeve yellow and blue stripe collared jersey with a Gorin emblem on his right chest, blue shorts with white folded sleeves, yellow socks and navy blue and red sneakers. It has extra blue lines on both sleeves of his shirt. He wears red and black gloves.

Roberto is a member of Gorin High's soccer team. Though he is quarter-Brazilian, his nationality is Japanese.

Upon learning that the highest-ranking member of every sports team in Gorin High was attacked and that two students from different teams, Shoma and Natsu, started conducting an investigation, he joined the two in the quest. Throughout the story, he serves as a moderator between Natsu and Shoma whenever the two argue. He breaks his arm towards the end of the mission, worrying him because he will not be able to play his preferred position in the soccer team, as goalkeeper. A scout, however, offered him a chance to play as a forward. Roberto excitedly thankful to the scout while shaking both hands but he hurts his injured arm causing both the scout and his mother to laugh at him.

Roberto is once again caught in the middle of Natsu and Shoma's argument. This time, it was whether or not they should investigate who attacked Momo. Shoma eventually splits from the team and decides to go with Momo, unaware that he was being used to create further chaos that Kurow started. Roberto, along with Natsu, eventually meet up with Nagare and continue with the investigation but they are unaware that Momo orders the brainwashed Daigo to deal with them. Shoma eventually returns to the team after being betrayed by Momo. When they arrive at the mountainous region, Momo reveals that she was working with the Darkside Student Congress headed by Kurow and his older sister, Yurika Kirishima. After the incident, Roberto, along with Nagare, comments on the newly-formed love triangle between Shoma, Natsu, and Momo as Shoma himself was comically chased by both Natsu and Momo.

The ball follows a mid-ranged trajectory, landing halfway across the field.

The ball goes at an upward angle of approximately 20 to 30 degrees, giving it infinite range. Done from afar, this makes a good anti-air attack.

Art of Roberto, Shoma and Natsu in the Gorin cafeteria. 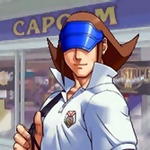 Project Justice
Add a photo to this gallery
Retrieved from "https://capcom.fandom.com/wiki/Roberto_Miura?oldid=132515"
Community content is available under CC-BY-SA unless otherwise noted.