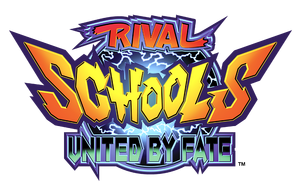 Although the aforementioned in-game fights are one-on-one matches, United by Fate was one of the earliest known 3D fighting games to feature the "team fighting" concept. Addtionally, its one of the first 3D fighters to have a story mode. The game also includes a secondary, non-fighting mode that reveals additional details about the characters and their lives.

Rival Schools began development when Hideaki Itsuno wanted to make a 60fps polygon-based fighting game.[1] As the earlier 3D fighting game Star Gladiator was already set to 30fps, because of things such as sword effects and backgrounds, the development team didn't exceed the limitations of the arcade hardware.[1]

The game was originally called Justice Fist, and the intial story was that fighters from every country came together to decide who was the strongest.[1] Itsuno wrote up the design document for the idea and showed it to several co-workers but after a humble respone, he decided to base it on something people had an interest in and understood, and went with a school setting because he believed that everyone has had school experiences.[1][2] Itsuno intended for the setting to be in a school where 40 characters fought to decide who would be the class representatives. After a programmer showed him three playable characters on a screen, Itsuno came up with the two-character team idea.[1] The reason for Street Fighter character Sakura's inclusion was because of worries of the game not selling well, thus she was added as "insurance" for the game's success.[1] 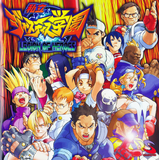