Riccardo Belli is a character and angtagonist in the horror game Haunting Ground.

A monk-like figure and Castle Belli's grounds-keeper, it initially appears Riccardo is the person in charge of the castle when in actuality he is a servant. Riccardo is searching for Fiona Belli's Azoth because he needs it to be reborn. Lorenzo created two clones: Ugo Belli and Riccardo Belli, although only Ugo was given the Azoth. Riccardo failed in getting the Azoth from Ugo, but realized that Ugo's daughter Fiona had the Azoth from her father's traits.

Unlike the previous stalkers in the game, Debilitas and Daniella, he seems to have no intentions of killing Fiona but punches, slaps or kicks her instead. However, if Fiona gets too close to him during a chase, he may get carried away and shoot her dead with his gun. He is clever and persistent and will frighten her by firing his gun in the air. The real danger in dealing with Riccardo is that he can shoot and seriously injure Hewie, leaving Fiona to fend for herself.

During the second fight, Ricardo is invisible for the most part due to the formula he "used" on her affecting her eyes. In this stage Ricardo is inexplicably more willing to kill Fiona, even having a high range grab where he lifts Fiona by the throat, strangling her, if Fiona doesn't escape in time her arms and legs suddenly go limp, and her head turns sideways. Indicated she has perished due to the high pressure crushing her neck and potentially suffocated.

Riccardo is finally defeated following a battle on top of the Water Tower, being knocked off the side by Hewie.

Among the game's endings the only one Riccardo appears in is the bad ending, "Tu Fui, Ego Eris". After the time Riccardo carries the younger Belli from the forest to the water tower, if Fiona does not heal Hewie or if Fiona has a really bad relationship with the German Shepherd, the bad ending is played. In this ending it is assumed Hewie wasn't able to, or wasn't willing to, save a still fainted Fiona from the actions of Riccardo. Fiona is shown sleeping, Riccardo is seen stroking her face and then proceeds to stroke her now rather large belly. After Riccardo leaves Fiona wakes up, she is then shown starting to laugh a maniacal laugh (still not as bad as Daniella's) and the screen fades to black, ending the game. It is implied that Lorenzo raped Fiona in this ending and she is impregnated as a result, and she is suffering from the after effects from Riccardo's harsh actions. 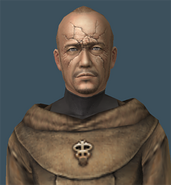