Resident Evil Survivor 2 - CODE: Veronica ("ガンサバイバー２：バイオハザードコード：ベロニカ" Gun Survivor 2: Biohazard CODE: Veronica in Japan) is an arcade light gun game by Capcom developed in conjunction with Namco exclusive to PAL regions and Japan. It was later ported to the Playstation 2 in said regions. The game features characters and stages taken directly from Resident Evil CODE: Veronica, although the game has no bearing on the Resident Evil plot. 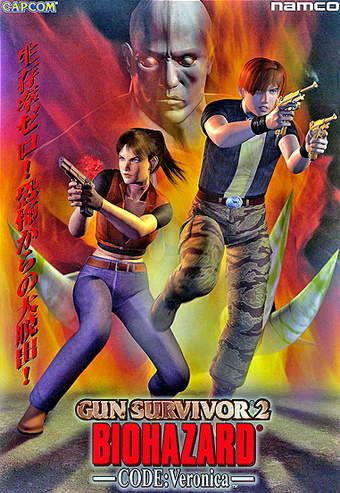 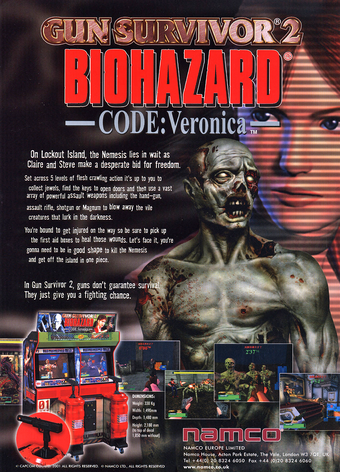 Claire Redfield continues to look for her brother after the Raccoon City incident after being tipped by an unknown source about an Umbrella facility in Paris. When she tried to infiltrate the facility, she was caught, after which she was taken to the Umbrella prison in Rockfort Island. She meets up with another prisoner, Steve Burnside, and plans to escape while an outbreak of the T-Virus is released onto the island.

This game's events are actually a dream which Claire is having after escaping Antarctica with her brother Chris Redfield at the end of CODE: Veronica, and as such has no connection to the main series' storyline one way or the other.