Resident Evil Outbreak (Biohazard Outbreak in Japan) is a single player game with online playability for the PlayStation 2 released in 2003. This game was the first in the Resident Evil series to feature online multiplayer support. However, online support was not available for European and Australian players. These features were added in the successor title, Resident Evil Outbreak: File 2. The game was produced by Tsuyoshi Tanaka.

Resident Evil Outbreak uses a command and ad-lib communication system. As opposed to using USB headphones or a computer keyboard, players would use a command "ad-lib" system which consisted of ten key command phrases, used with the right joystick on the PlayStation controller, and a button which shot out lines depending on the situation. The player can select items from his/her teammate's inventory and request it, or ask them to use it. While some people preferred this type of system, many despised it with people claiming the phrases would not cover enough during gameplay.

The commands and ad-libs themselves only covered the basics, for example if a character was using a stronger weapon on a weaker enemy, the player has no option telling the other player/players to stop using it. The player could only shout various phrases such as "No" or "Wait" hoping the other player/players would understand. The system often requires the player removing their fingers from the controls to give these commands. However, one helpful feature included was an option to ask a teammate to use an item, such as a health item if wounded, or a weapon during a battle.

Moving a cursor over an item in the inventory will show a brief description below the EKG (heart monitor). Selecting an item will bring up a series of actions related to that particular item: Use, Equip, Combine or Present. If the player presents an item, the character will offer it to the other players who can come up and take it but he/she will still be in the inventory screen. When picking up an item from the ground, the player can choose to swap it with an item in his/her inventory or combine it with herbs or ammo already inside. However, key items cannot be combined in this way nor can weapons be reloaded without first having both items in your inventory. Item swapping is an excellent way to stock up an area for a battle or to leave items for partners behind.

Resident Evil Outbreak presents the first time in the series that players have been given multiple melee weapons, and even their own bodies (via kicks, shoves and rams), to use against enemies. However, many such weapons are very weak and still no match for a firearm of some kind, and should only be considered a last resort. Weapons and physical strikes can also be used to break down doors instead of opening them manually, although some enemies have the capacity to do the same.

Outbreak doesn't progress like standard Resident Evil titles. Instead of choosing a character and following a straight path, the player chooses a scenario, difficulty, and a character. The difficulty is strongly tied to what enemies and items the player sees as he or she progresses through the game. Each scenario has an event checklist which consists of special actions the player must perform to reach 100% completion. Upon doing so, the player will unlock Infinity Mode, where all weapons never break or run out of ammo.

Each scenario also has its own fair share of SP Items. These are invisible items hidden throughout the level. They are randomly generated on two paths - A and B. If the player finds them all, they receive special items for their gallery. There are twenty scenario items for each scenario, and twenty items specific for each and every character hidden across the five levels. They are hidden around the levels, and if acquired, unlock new costumes and the option to listen to their ad-libs.

The scenarios do not follow a basic format. They tend to swap places a lot. Many players think that the stages were chosen out of the original twenty from the beta version of Resident Evil Online. This helps explain why the story isn't linear. The game's sequel, Resident Evil Outbreak: File 2, includes levels which can be used to bridge the original five together. 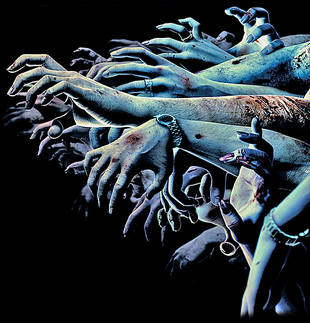 The game features a large supporting cast, all of which are playable after purchase with scenario result points.

These stick figure of five of the eight main characters obviously are not featured in the storyline, and are alterations of the characters' statistics, some better and some much worse.

Resident Evil Outbreak begins a couple of days after the initial outbreak in Raccoon City, moments before the crisis erupts into complete chaos. The game ends in the final moments of the incident, with the player attempting to escape Raccoon City before the U.S. government launches a missile strike to eliminate the threat posed by the T-Virus. The player controls one of eight characters, or numerous supporting characters who can be selected in their place. Events transpire across various regions of Raccoon City and over a period of several days. Events also span from Resident Evil 2 through Resident Evil 3: Nemesis.

Resident Evil Outbreak is broken up into five chapters, or scenarios.

After zombies attack J's Bar, everyone takes the stairs to the roof. After jumping across to the building next to it, the survivors take the elevator down to escape. Having exited the bar, Officer Raymond Douglas instructs players to make a barricade while he blows a door open with his shotgun. After Raymond is killed, leaking gasoline from a truck can be ignited with Raymond's lighter. This engulfs the entire section in flames, forcing players down a manhole into the sewers. After riding an armored van driven by Dorian to Main Street, players must make a choice to either backtrack to the van and talk to the officer, or combine both parts of the detonator to make an explosion on Main Street, killing every zombie in the process, except your character, partners, and Officer Harry. The latter is the "true" ending of the scenario.

In the Umbrella facility's escape tunnel miles below the lab, Yoko is nearly shot by a researcher, who reveals herself to be Yoko's colleague, Monica. After Monica steals Yoko's ID card and escapes, players proceed up a ventilation shaft to the upper floors. Everything has been frozen, and needs to be thawed before escape from the facility is possible. After finding a blowtorch, players use it to melt the ice covering a lever, switching it on. This not only unfreezes the entire floor, but also a group of frozen Hunters that were encountered earlier. As they rush back to the exit, the survivors defend themselves from the Hunters. Monica reappears and collapses on the ground without saying anything. As the elevator they are using rises up, Monica's chest bursts open with a G-Larvae, presumably from being attacked before, killing her instantly. The larvae makes its way up to the marshalling yard, where it grows to a giant complete "G". When the creature is finally dead, they board a locomotive and operate it, moving on to a power plant.

The survivors take shelter at the Raccoon General Hospital, last seen in Resident Evil 3. With power to the elevators having gone out, Dr. Hursh leaves to turn it back on. He is attacked by leeches, and is used as a vehicle in which they can assume a humanoid form. Players eventually wind their way down into the waterways of the sewers for a boss battle with the Giant Leech.

Two firemen - Len and Charlie - inspect the boiler room of the Apple Inn. After the boiler shows signs of a malfunction, the two retreat, but are too late to avoid an explosion. The ensuing damage to the building forces the structure to block the door within the Inn's courtyard, where survivors are gathered. As the survivors travel around the burning hotel, they run into various zombies, lickers, and dying or already dead hotel visitors. When the group reach the Apple Inn's front lobby, they fight a half-transformed Licker known as "Suspen-Dead" which appears to be a zombie-licker hybrid. Soon after the Suspen-Dead's death, a firefighter breaks open the door and helps all of the remaining survivors out.

George reads a note from his friend Peter Jenkins, asking for his help at the university. A few hours later, George leads a group of two or three other survivors into the university. The survivors find Peter, apparently killed by a gunshot to the back. His notes suggest that he was working on an anti-virus called "Daylight", which eliminates the T-Virus from the body. The survivors spread out to locate the three components needed to make the anti-virus.

Meanwhile, a team of Umbrella mercenaries encounter Thanatos, an experimental Tyrant created by former Umbrella researcher Greg Mueller, who was instrumental in creating the Daylight anti-virus as a means of combating the T-Virus. Meanwhile, U.B.C.S. operative Nicholai Ginovaef tries to obtain a blood sample from the Tyrant, shooting it with a capsule. The creature resists, and quickly annihilates the team of mercenaries before leaving. After the survivors temporarily disable Thanatos by electrocuting it, the capsule falls out, enabling them to retrieve the T-blood, one of the three components.

A pre-collected sample of V-poison is recovered on the top floor of an emission tower. The P-base, a sample of the unaltered Progenitor virus which "t" derives from, is found in a water-processing facility deep under the University. When finally synthesising the vaccine, the power to the machine is cut. They are confronted by Greg who discusses having them killed by Thanatos. Greg is then shot through the neck by Nicholai, allowing the survivors to escape with the "Daylight" samples. The harried survivors reach the courtyard, and a rescue helicopter circles around to pick them up. Before it can descend to reach them, however, they are forced to deal with Thanatos, which has mutated into a Super Tyrant. After defeating the beast, the helicopter rescues them and they escape the city as it is bombed, with the Daylight in hand and hope for the future.

Resident Evil Outbreak was part of an initiative from Capcom's Production Studio 1 to develop three games, the other two titles being Monster Hunter and Auto Modellista, that takes advantage of the processing power and online capabilities of the PlayStation 2; according to one of Capcom's producers Ryozo Tsujimoto, the system had begun to match arcade games in capabilities.[1] Capcom's plan was that at least one of the games would sell a million copies. Both Monster Hunter and Resident Evil Outbreak eventually sold a million copies each.[2]

This section is currently incomplete.
You can help Capcom Database by expanding it. Resident Evil Outbreak received low ratings from various websites and gaming magazines for its use of a command and ad-lib communication system. The system was criticized on how the ad-libs were integrated into the control scheme, with the player often having to remove their fingers from the controls to give these commands. 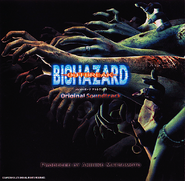 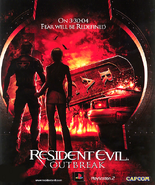