Resident Evil Gaiden (Biohazard Gaiden in Japan) is a 2001 spin-off game in the Resident Evil series of surivival horror games, released only for the Game Boy Color system. It is the only game in the series so far which features Barry Burton as the main character. None of the game's events are acknowledged anywhere else in the series. It was developed by the now defunct company M4 Ltd.

After the events in Raccoon City, an underground anti-Umbrella organization formed to stop Umbrella's evil deeds. A new Bio-Organic Weapon (B.O.W) developed by Umbrella is rumored to be aboard the ship STARLIGHT, so Leon S. Kennedy is sent to investigate. Shortly after he boards the ship, HQ loses contact with him and Barry Burton is called to carry over Leon's mission. Upon his arrival, Barry finds out that an outbreak similar to the one in Raccoon City has happened on the ship.

Shortly after, Barry goes to the ship's Security Room and sees a scared girl through a camera. Using an intercom device Barry talks to her, finding out her name is Lucia, and asks her about the ship's events. They barely could cross words, however, as the B.O.W was ramming the door of Lucia's room, and she desperately asks Barry for help. After asking her location, Barry rushes to the scene and with a few shots sends the B.O.W away.

Having Lucia with him, Barry continues to search for Leon, but upon approaching his location, Lucia says that she "feels" the B.O.W is near. Surprised, Barry asked about her odd ability, but the B.O.W reappears and abducts Lucia, leaving Barry alone. Barry then finds Leon alive, and then they team up to find Lucia. They find her on the ship's deck and Leon and Barry fend off the B.O.W using their guns, giving them enough time to flee.

Lucia reveals her background as an orphan child that was picked on by the other kids because she was "different". She couldn't stand that situation anymore, so her adoptive family sent her to Europe in the STARLIGHT.

Shortly after, the B.O.W begins to harm the ship, causing an internal explosion, so Leon and Lucia are forced to activate the sprinkler system while Barry takes care of a "personal matter." That matter is revealed when Lucia and Leon see him through the security cameras arranging a deal with someone to give them Lucia. Leon then goes and confronts Barry, but Barry holds his gun to Leon and takes Lucia away with him, to an Umbrella submarine. Leon has a shoot-out with some Umbrella soldiers, but they flee quickly.

Left for dead, Leon hears more explosions coming from the machine room, and in the fear that the ship is sinking, he goes there to fix it and try to buy some time, he finds the B.O.W. After a showdown with it, Leon wins, but he is resigned to his death in a ship that is just about to sink.

Meanwhile in the submarine, the Captain reveals that Umbrella wanted Lucia all along because she was the real B.O.W, the other one being a decoy. It is also said that the shape-shifting B.O.W has green blood. Barry then betrays the Captain, saying that his original intention was to find a means of escape from the STARLIGHT; then he forces the Captain and his team of surgeons to extract the parasite B.O.W from Lucia's body. Shortly after they do so, the creature moves on its own and attacks the captain, turning him into a zombie. Barry then kills him but discovers another outbreak in the submarine caused by the B.O.W from the STARLIGHT, which was in the control room roaming free. After Barry and Lucia find their way to the control room and guide the submarine back to the STARLIGHT, the B.O.W goes back to the ship. After arriving to the control room they find Leon, who escaped from the sinking ship. After the trio reunites and are just about to escape the ship, the B.O.W makes his final appearance. After the hard fight, they run from the STARLIGHT and watch the ship sink. Leon makes the final report to HQ, saying that the mission is accomplished, but then a scene is shown where there appears to be a small cut on Leon's neck dripping green blood... 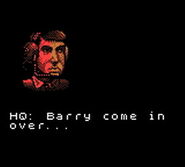 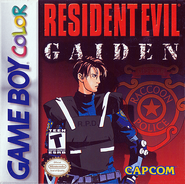 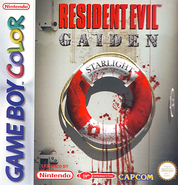