For Resident Evil: Revelations 2, an identical camera view and style was adopted as that of its predecessor. Much like the original Revelations, the sequel bears a stronger tone to the concept of survival horror than Resident Evil 5 and 6, which Capcom admitted erred on the side of action very strongly. Elements of ammunition management as well as stealth or sneaking come into play in term of Revelation 2's gameplay.

A new type of enemy appears in the form of the Afflicted, described as being very violent and attack the player viciously on sight. Their bodies are heavily modified and mutilated and like the Ganado of Resident Evil 4 and other later enemies, the Afflicted are capable of using weapons such as axes, wrenches, and saws.

Unlike the original Revelations, Revelations 2 returns to co-op in its campaign, however the co-op is for local, offline play only. The title also includes the return of "partner zapping", a concept that was only previously seen in Resident Evil Zero. With this, players who are playing solo will be able to freely switch between the two characters: Claire Redfield and Moira Burton.

Each character has its own unique style of play. Claire is responsible for the firearms such as the handgun and shotgun she comes across in the prison facility, as well as a knife she is able to use freely. Due to this, Claire is the primary combatant and it will fall upon her to dispatch of any enemies they come across, should players choose to not flee. Claire is able to heal herself with herbs found, but unlike many previous games, healing takes time. The button must be held down as Claire deposits the herb into a sprayer so she can administer healing to herself.

On the other hand, Moira fills a support role. Her primary item is a flashlight found with Claire's knife. With this, Moira is able to not only provide light for Claire but also use the light to blind or stun Afflicted. The flashlight can be used similar to the Genesis scanner from Revelations, able to reveal hidden items and secret that Claire otherwise cannot see. Moira also finds crowbars which she can use to pry off boards that are blocking doors, and also swing them as weapons in self-defense. With the crowbar, Moira is able to incapacitate an enemy if she strikes it from behind and also perform a finishing attack on enemies that have been knocked down.

Inventory menu returns in Revelations 2 with Claire and Moira having different inventories. While Claire comes with ten open slots, Moira only has five. Ammunition, throwable items and quest items take up item slots. Items can be discarded and they will be dropped on the ground where the character is currently standing. The weapons switch system is very similar to Resident Evil 5 in terms of using directional buttons to switch items.

For the first time, both characters are also able to crouch and sneak for the allowance of stealth approaches or potentially avoiding enemies. Unlike Revelations, dodging is no longer situation and can be done with designated button and directional input.

Revelations 2 also featured the return of the first game's Raid Mode minigame. Many core mechanics were dramatically changed from Revelations and players were able to visit locations from other games in the series, including Tall Oaks and Edonia from Resident Evil 6, and fight monsters from other games, such as the Scagdead and Hunters. The maximum level was raised from 50 to 100. The game's mission structure was also changed: 'main' missions cost in-game money to play, and money could only be earned by completing daily missions and event challenges. Main missions were now grouped together in packs, each containing six levels.

Raid Mode also now had a distinct plot, unlike in Revelations. The player assumed the role of an AI fighting in a combat simulator constructed by the Red Queen Alpha database. The AI, which was able to assume the forms of different characters from the series, must complete various combat missions while collecting audio logs detailing the true nature of Red Queen Alpha. A mansion-like area was confirmed to act as a central hub from which missions can be accessed.

This section is currently incomplete.
You can help Capcom Database by expanding it. The bulk of the game takes place on a remote island, after Claire and Moira have been kidnapped and taken there. Creatures include Afflicteds, Rottens, Iron Heads, Revenants and Sploders. 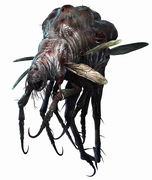 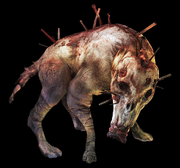 Pedro Mutated
Add a photo to this gallery 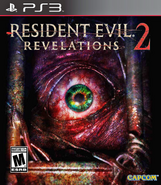 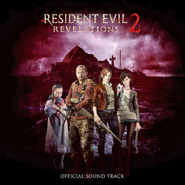 Ultimania Guidebook
Add a photo to this gallery