Resident Evil: Operation Raccoon City is a third-person shooter game published by Capcom and a spin-off installment in the Resident Evil series of survival horror games. The game was developed by Slant Six Games, the well known developers of the SOCOM series. Operation Raccoon City was released for Microsoft Windows, Xbox 360 and PlayStation 3, on March 20th 2012 in North America and March 23rd 2012 in Europe.

Resident Evil: Operation Raccoon City includes twelve playable characters (six for the U.S.S. and Echo 6 campaigns, respectively). However, the players can choose only four characters for the on-line modes. Each team member has their own special role and abilities.

The game has players taking the role of one of the members of a U.S.S. clean up crew. Alongside a single player mode, the game also offer a 4 player co-operative mode as the player experiences the events of the game.

The game was focused in the action and shooter genre, depicting the survival horror origins of the series, in a third person perspective, like in Resident Evil 4 and Resident Evil 5, but with the addition when characters can run and shoot, aim or reload their weapon at the same time. Graphically, the screen can be effected in different ways including blood splatter from killing or hurting an enemy, or being covered in vomit from zombies and crimson heads.

If the players are shot repeatedly in a short time frame, their blood will attract zombies and B.O.W.s until the bleeding stops a few moments after.

Zombies will grapple players trying to bite them, the player will have one chance to get free by completing the buttons (i.e moving the Joystick left and right rapidly) if completed they will shove the zombie off, if not, the zombie will overpower the player and bite them.

Infected teammates will slowly lose health and must be cured with an Anti-Viral Spray, however the players can keep the infection at a stop by constantly healing with Herbs or First Aid Spray. The infected players, who have turned into zombies, will have no control over their character and will attack their teammates. The zombie player must be killed before another teammate can revive them.

Players earn experience points throughout each match for player and infected kills and victories. These points can be spent to unlock or upgrade class abilities and passive powers. These powers can be upgraded a maximize of three times. Players may also unlock weapons. However, during matches, players can pick up the dropped weapons of other players, even if they have not unlocked said weapon.

Team Attack mode resembles traditional team deathmatch in that two teams representing Spec Ops and U.S.S. compete for kills in a timed match. Team Attack also uses a point based system in which monster kills and enemy player kills earn a set amount of points, with a larger point distribution for the latter.

Survivor mode is a unique game mode in which two teams battle for seats on the last helicopter out of an infected zone. Killing opponents lengthens their respawn time, giving players a better opportunity to safely board the helicopter when it arrives. While players work in teams, individuals only win if they successfully board one of four seats on the helicopter.

It's set in Raccoon City, whose residents have turned into flesh-eating zombies after an outbreak of the T-Virus, a biological weapon developed by the Umbrella Corporation. However, it's a reinterpretation of the events that originally happened, and players are given the opportunity to change the occurrence of certain events in the Resident Evil games, thus making it non-canon to the series.

Players will take the role an officer of Umbrella's military force, the Umbrella Security Service (U.S.S.) Delta Team, informally referred to as the "Wolfpack". Members of the USS are tasked with destroying evidence of Umbrella's cause of the outbreak, including innocent survivors of the outbreak. Among their enemies are the Echo Six, an elite squad in the Special Forces branch of the US Government, who are tasked with exposing Umbrella's actions and understanding the cause of the T-Virus outbreak in Raccoon City.

The game is separated into two sides: the side of the USS team, known as "Wolfpack", and the side of Echo Six (playable in DLC). Each side has seven chapters, where players can choose four of the six playable characters per side.

U.S.S. Delta Team (also known as "Wolfpack") enters the Raccoon City Underground Laboratory, where they meet up with U.S.S. Alpha Team leader HUNK. Their mission: to assist the Alphas in stopping Dr. William Birkin from handing over his G-Virus research to the U.S. Military and retrieve the G-Virus. On their way to Birkin's lab, they find that Birkin has paid-off numerous U.B.C.S. mercenaries into working for him while the deal goes forward. When they reach Birkin's lab, the doctor is shot at from behind a closed door, HUNK and another Alpha leave with the samples. Heading up the elevator to meet up with GOBLIN 6, they soon find that Birkin has survived the attack and injected himself with the virus. The creature proceeds to kill off most of Alpha team before disappearing; HUNK offers to go back in search of the sample.

Not long after the battle, it becomes evident that the T-Virus has leaked city-wide, and people are beginning to turn into zombies soon after. In what they see as a punishment by U.S.S. Command, Delta team is ordered to remove evidence of Umbrella's role in the outbreak. Heading into Raccoon City Hall, Delta Team meets with a U.B.C.S. mercenary, Nicholai Ginovaef and montior him. However, he is soon revealed as a traitor and attempts to kill the Wolfpack.

Later, the team is sent out around Raccoon Park to find the Nemesis, which has gone rogue. A second parasite is injected into its body in order to bring it back under control. Shortly after this mission is completed, the team is then sent out to the Raccoon City Police Department, ordered to kill any surviving police officers and destroy evidence linking the company to the outbreak. When this is all done, the team exits the station, and soon after encounter rookie R.P.D. Officer Leon S. Kennedy, whom they begin to hunt down.

The Wolfpack chase Leon through a dozen streets despite his pleas to stop shooting at him. U.S.S command grow anxious and abandon Wolfpack in favor of Plan B (The deployment of several T-103s and Hunters from drop pods). Eventually, after a lot of fighting, Leon successfully evades the squad and they decide to find shelter for a breather.

They mop up a small Spec Ops force at a barricade outside City Hall, as well as a pack of Hunters. The Wolfpack then find themselves ambushed by two T-103s and barely manage to take them down. The team retreats into an abandoned Barber shop to catch their breath, making failed attempts to get back in touch with U.S.S command.

Shortly after that, Wolfpack are making a last stand and take down just over 1000 B.O.W.s attacking their position, Umbrella command decides to give the team one final chance and order them to return to Birkin's lab to find Leon. The team find themselves back at square one and eliminate countless enemies as they make their way through the labs.

They engage in battle with Ada Wong briefly before she makes her escape. The self-destruct sequence activates and the Wolfpack see Leon kiss Ada and her supposed death on the control room's camera monitor. Wolfpack then fight their way to the power room to find Leon and Ada missing. With little choice left, they abandon the facility but not without fighting the Super Tyrant which emerged from the boiler earlier on.

Eventually, U.S.S. Command finds the location of Leon, who are also with Claire and Sherry, and sends Wolfpack over to Lonsdale Yard where they have teamed up with whatever is left of the Army Spec Ops to defend the train yard. The Wolfpack break through their lines despite Claire's attempts at decimating them with a grenade launcher as well as massive mobs of Crimson Heads and zombies.

With Claire going into retreat, Leon comes out of hiding with a sniper rifle firing at the Wolfpack. The Wolfpack then fire upon the spec ops guarding Leon's platform and cause a soldier to bleed heavily causing a blood frenzy amongst the B.O.W.s. They smash down the barricade and overwhelm the last of the Spec Ops.

Wolfpack make their way to the ladder and subdue Leon using him as bait to lure Sherry and Claire out of hiding. Leon questions what they fight for and the Wolfpack engage each other 2 on 2. The defenders of Leon believing they can use him as leverage for evac, whilst the assassins believe carrying out these orders will finally earn them evac as well.

The player character and one other member of Delta Team are forced to kill their former comrades, who argue that Leon S. Kennedy must die in order for the mission to be completed. Afterward, they capture a wounded Kennedy, along with Claire Redfield and Sherry Birkin. However, they disregard U.S.S. Command's instructions to immediately execute the R.P.D. officer, hoping to use their hostages as leverage for negotiation. Command is outraged by Wolfpack's defiance and refuses to make a deal with traitors, thus causing the former U.S.S. operatives to sever their allegiance to Umbrella.

With no further use of Kennedy and his companions, Wolfpack allows them to live, partly to spite Umbrella as well. As they move to depart from the ruins of Raccoon City, Wolfpack vows to destroy the Umbrella Corporation from within.

In the alternate ending of the U.S.S. campaign, the player character and one other member of Delta Team remain faithful to the Umbrella Corporation, although two other operatives betray the company by protecting Leon S. Kennedy. After executing the traitors and Leon, the surviving members of Wolfpack capture Claire Redfield and Sherry Birkin. Contacting U.S.S. Command to report the successful completion of their objective, Wolfpack is instructed to kill Claire and deliver Sherry to Umbrella. Claire pleads for mercy, but the player character simply states that they are following orders, shortly before shooting her in the head. 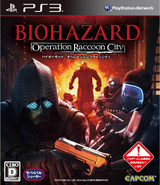 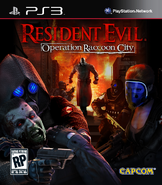 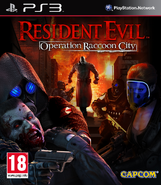