Resident Evil: Degeneration (バイオハザード ディジェネレーション, Baiohazādo Dijenerēshon?), is an animated horror film based on Capcom's Resident Evil series of survival horror games. It is the first full-length CG animation feature in the franchise and was announced by Capcom and Sony Pictures Entertainment Japan on October 29, 2007.

Unlike the live-action Resident Evil film series, Degeneration is set within the same universe as the original video games, taking place "seven years from Raccoon City". The teaser included with the Resident Evil: Extinction DVD and Blu-ray Disc confirmed the appearance of Leon S. Kennedy and Claire Redfield. The film made its premiere in Japan on October 11, 2008 at the Tokyo Game Show, and was released nationwide one week later on October 18. The DVD and Blu-ray were released on December 27, 2008. A sequel titled Damnation was released in 2012 and a third film titled Vendetta was released in 2017.

Seven years since the Raccoon City incident, Claire Redfield is now a member of Terrasave, an organization which handles search and rescue at chemical and biological attacks. Claire arrives at Harvardville Airport to meet a friend.

A passenger aeroplane is approaching the airport to land. As one of the attendants checks the passengers, she notices one man looking unwell. The man in question is clearly in the final stages of T-virus infection, and warns the attendant. Shortly after, he zombifies.

Claire is looking after her friend's niece, Rani Chawla, when they see Senator Ron Davis walk by. While a zombie-masked protester is arrested by a police officer, another "zombie" comes along. The officer walks behind it to pull the mask off, but it is not a mask. He is bitten by the zombie. One of Davis' bodyguards shoots it. While surprised that the creature gets back up, he is attacked by the security guard, whom he thought was dead. The second guard attempts to run but is also devoured.

The scene causes massive panic and people in the vicinity flee, some being attacked by more zombies. The airport public address system warns the civilians to evacuate.

The plane crashes into the building. Although killing several zombies, the door opens to reveal the occupants of the plane have turned into zombies. Claire, Davis and Rani hide.

Night-time, the airport has been locked down by Marines and the survivors evacuated for treatment one at a time, many still locked inside the airport. Two Special Response Team (SRT) members are joined by a government agent with experience of such incidents, Leon S. Kennedy. The group enters the building through the roof and begin their search.

Leon keeps an eye on the team, who are untrained in handling zombies. Claire is locked in a room with Davis, Rani and another woman. Upon hearing gunshots, Claire arms herself with a red and white umbrella. The two groups join up. They must get to the lobby to escape, which is occupied by zombies.

As they head off, one SRT member is bitten by a zombie and stays, determined to save the rest by killing the creatures nearby. The survivors stand over the crashed plane for safety, with the SRT members and Leon killing the zombies near the exit.

The survivors must leave or more zombies will come. After the remaining survivors get outside, the Marines go in.

Claire, upon being told that the WilPharma Corporation, who she was campaigning against, was creating a T-virus vaccine, she realizes that the vaccine could have saved those who died. Suddenly, the WilPharma trucks containing the vaccine are destroyed. Claire goes with WilPharma worker Frederic Downing to the WilPharma research facility for more vaccine. After a tour of the place, Claire is shown a molecular-scale image of the G-virus. She is left alone in the room as Frederic heads for the sample.

Claire receives a phone call from Leon who, along with Angela Miller, discovers Curtis Miller's house burnt to the ground. Frederic phones Claire to warn her that a man has just left the facility and that a time bomb has been activated. Claire looks out of a window and sees Curtis Miller running through the central gardens with a briefcase. The bomb goes off and Claire is injured.

Leon and Angela arrive and Leon goes upstairs to Claire while Angela monitors the ground level. While Leon is upstairs, Curtis arrives at the garden. Not having much time left, he tells Angela that the government covered up some of the events in Raccoon City which kept his family from being saved.

US Marines storm the room, aiming at Curtis, believing him to be a terrorist. Curtis is unable to hold on and begins to mutate from the G-virus. The marines fire at him, and Curtis starts killing them. Leon saves Angela from the massacre as the garden begins to fall apart, with wreckage crushing Curtis. Believing him to be dead, the surviving marines head up the elevator to safety, Leon and Angela choosing to stay downstairs and wait for the elevator to come back down. Suddenly, Curtis gets out of the wreckage and mutates further. He climbs up the building, detaching the elevator and throwing it down, killing the marines inside.

The building is then set ablaze by the WilPharma computer system in an attempt to avoid the T-virus and G-virus's spreading causing a Racoon city re-occurance, Angela and Leon jump into a pool of water to avoid burning wreckage. Leon shoots the water tank window to escape drowning. The two then find themselves in an enormous underground area. Meanwhile, Claire makes it to the command centre, doing whatever she can to halt a biohazard alarm and open the building. She fails and the detection of Curtis in the underground centre causes another alarm. This time, parts of the building will be ejected underground.

As Leon and Angela search for an escape route, Curtis attacks them, seeing Leon as a threat and Angela as a mate. Eventually, Curtis manages to regain control, telling Angela to run. As the sections are being ejected, Leon and Angela climb up wreckage. Almost free from the drop, Curtis grabs hold of Angela. About to fall, Leon shoots Curtis in the face. He falls to his death.

Leon, Angela and Claire exit the building where Claire accuses Senator Davis of the cover up and the Harvardville Airport incident. Leon reveals that he does not know anything. Claire then realises that the real villain was actually Frederic, who caused the outbreak in the airport, the disaster on the plane, the destruction of the vaccine and the bioterrorism incidents by selling t-virus samples.

Waiting for a contact to sell WilPharma information to, Frederic mistakes a car containing Leon and Claire for his contact. He is then arrested by Angela.

The next day, Leon and Claire say goodbye. Meanwhile, news gets out that Davis has resigned from office over allegations of insider stock trading with WilPharma stocks. A newspaper draped over Davis's face reads "TRICELL OFFERS TO BUY WILPHARMA". Davis's hand falls from the desk revealing him to be dead. The film ends with Tricell employees in hazmat suits searching the underground ruins of the WilPharma research building, where they discover a fragment of Curtis's body infected with the G-virus.

Features marked with the asterisk (*) are Blu-ray exclusive.

Nokia and Capcom created a game loosely based on the film for the N-Gage mobile gaming service. This game was released on December 18, 2008, while the iPhone version was released on May 10, 2009. Despite being a main character in the film, Claire is not playable, with Leon being the sole protagonist and playable character in the game. The game takes place in the airport from the early scenes of the film, and also contains enemies not seen in the actual film. 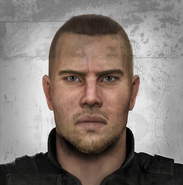 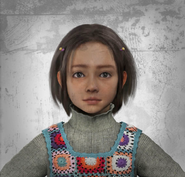 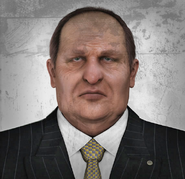 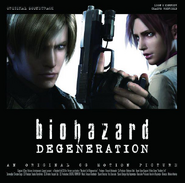