Resident Evil: Damnation, known as Biohazard: Damnation (バイオハザード ダムネーション Baiohazādo: Damunēshon?) in Japan, is a 2012 Japanese feature-length computer-animated horror 3D film based on Capcom's Resident Evil series of horror games. The film was published by Sony Pictures Entertainment Japan, directed by Makoto Kamiya and produced by Hiroyuki Kobayashi. Damnation is a sequel to Resident Evil: Degeneration and the story revolves around biological weapons used in a European war zone, and sees the return of Leon S. Kennedy as the protagonist.

The film was released on October 27, 2012 in Japan, premièring in Shinjuku, Tokyo. It was later released as a digital download on Xbox Live, Zune and PlayStation Network on September 15, 2012, just over a week before the Blu-ray/DVD editions on September 25. Damnation is followed by a third film, Resident Evil: Vendetta, which was released in 2017.

Leon S. Kennedy sneaks into the Eastern Slav Republic (a fictional country that separated from the Soviet Union) to verify rumors that Bio-Organic Weapons (BOWs) are being used in the country's civil war, which the United States and Russia are preparing to intervene in. After his arrival, Ingrid Hunnigan, Leon's mission support, informs him that the government has ordered an immediate retreat of all U.S. forces and citizens. Determined to stop the BOWs, Leon ignores the order and enters the battlefield.

Kennedy comes across his CIA contact, "Scarecrow," who has been violently attacked to near death. He manages to murmur "bee keeper," which invokes a flashback to a honeybee van that Leon saw earlier, before a Licker attacks and silences Scarecrow. Leon is knocked out and confronted by the Licker, until a shadowy figure appears. He seems to able to control the creature, as proved when he orders it not to kill Leon. When Leon regains consciousness, he finds himself tied to a chair and meets three rebel fighters: J.D., Alexander 'Sasha' Kozachenko (Buddy), and the elderly Ivan Judanovich, who is the Ataman of the group. Leon quickly realizes that the rebels are using BOW's taken from the Lickers, and urges them to stop; Sasha refuses.

Meanwhile, President Svetlana Belikova meets Ada Wong, who is posing as a member of the BSAA. She provides information about BOWs to Svetlana and her generals, revealing a way to control BOW's using the Plaga parasites. Elsewhere, Republic soldiers burst into the rebels' hideout underground and surround the fighters. Leon tries to warn them about the Plagas awakening in Ivan, but Sasha grabs his gun and shoots each of the soldiers. Ivan tells Sasha to leave him behind, fearing that his sickly state will get them killed before the planned attack on the Presidential Palace the next day. Sasha reluctantly kills him. Leon tries to find a way out.

Down the tunnels, Leon retrieves his flashlight and fights some Plaga hosts. He encounters JD, only to be attacked by more Ganados. J.D. is too frightened to shoot a former friend and Leon saves him. JD begins to trust Leon and leads the way to the church, retreating up to the surface of the city square where they witness a soldier being surrounded by a horde of Ganados.

JD wants to help but is stopped by Leon. One of the Ganados takes out a parasite from her mouth and forces it down the soldier's throat. The soldier coughs and becomes infested. JD expresses his shock but Leon is hardly surprised, having experienced the Plagas within himself in Resident Evil 4. He suspects the rebels of possessing and infecting themselves with the parasites in order to control the Lickers - their secret weapon against President Belikova. He reveals that the infections are the cause of the civilians' current condition. Inside the church, Sasha appears with his remaining rebels. Although he agrees with Leon, he still sees the American as a threat to the rebellion and surrounds him. After he is gone, JD pretends to interrogate Leon by going outside. J.D. actually is scared for Sasha and urges Leon to stop him. He reveals that the death of the latter's fiancée and her students from a government bombing of an elementary school is the cause of his hatred and anger against the government, and that his loss of morals is merely another casualty of the war. J.D. frees Leon and gives him a machine pistol. Leon heads into the same car parking lot where he was attacked by Lickers earlier.

Upon finding Sasha's empty suitcase, he meets Ada, and a brief combat ensues. Leon initially thinks Ada is responsible for the Plaga outbreak due to her sample-retrieval mission in Resident Evil 4. Ada denies it and confesses that retrieving a sample is her primary objective in Eastern Slav. Ada leaves by using her hook shot, then warns Leon that the city will soon be purged (bombed) by the military. Leon returns to the church to find it surrounded by Ganados. Once inside, he finds that the rebel fighters have all killed each other, and J.D. is the only survivor. J.D. hands Leon all his gear back, including J.D.'s canteen. Sasha enters and J.D.'s rough coughing reveals that he is infected. Before he can do any harm, he is shot in the legs by Leon.

As the Plaga takes control of his body, J.D. confesses that he never wanted to be a fighter and all he wanted was to be with his friends. As J.D. transforms, Leon shoots him again for good, stating that he was looking forward to showing him America. Leon asks Sasha to give up the Plagas. He refuses and escapes when military jets bomb the church, bringing the ceiling down. Inside the Presidential palace, President Svetlana learns that Ada does not actually work for the BSAA. The military sets up a perimeter at the gate outside the Palace, but is wiped out by Lickers emerging from the Honey Bee trucks. Inside, Svetlana exposes Ada as a fraud while her aide raises a gun to Ada. Ada disarms the aide then engages the president in hand-to-hand combat, finding the former self-defense instructor to be a worthy match.

The phone rings and the aide answers to inform the President that the Lickers have broken through the gates. Ada attempts to escape but a metal door shuts the room's exit, revealing the office doubles as an elevator. Leon makes his way past the palace gate to bloody corpses lying about. Inside, he is attacked by two Lickers and attempts to escape through double doors, revealing a large shaft where elevator descended. Ada awakens to find herself tied to the ceiling but manages to free herself by using a hidden knife she had stored within her high heels. She makes her way to the main hive control and encounters Leon. Their conversation is short; Svetlana and her army troops surround them. Ada releases a smoke bomb and escapes while Leon gets into a shootout with the soldiers, managing to kill several of them. Leon holds Svetlana hostage but she easily escapes and fights Leon.

Being evenly matched, Belikova throws him to one side and orders her men to open fire, but Leon manages to evade. Lickers, led by Sasha, arrive through the elevator and begin attacking the troops and Leon. Alexander rushes head-on towards Svetlana and her aide, but finds himself blocked by bullet-proof glass. Svetlana activates her own BOWs before escaping - two Tyrants- to wipe out all opposition, including the Lickers. Leon and Alexander team up and barely make it out of the palace basement, thanks to Ada unlocking the elevator door, and escape through an emergency ladder when two Tyrants caused the elevator to collapse.

Outside the palace, a third Tyrant appears. Leon and Alexander work together to attempt to bring down the Tyrant. All strategies fail until Alexander runs a tank to save Leon before being killed. Leon joins him and they fire the tank gun to decapitate the Tyrant while holding its head in place with a Licker. With the tank overturned after the fight, Leon and Alexander are forced out into a confrontation with the first two Tyrants, which have finally reached the surface. Leon grabs Sasha to flee while the Tyrants give chase. The scene then changes to Svetlana, who is practicing her press conference speech. Ada would soon have an international bounty placed on her head. Meanwhile, Leon and Alexander are too exhausted to continue fleeing. With no ammo left, Leon brandishes his combat knife to make a last stand, when U.S. jet fighters appear and take out both Tyrants. Just as Svetlana prepares for her press conference, she is informed by her aide that they are under attack by both U.S. and Russian forces. Their bombardment and subsequent occupation eventually forces her to resign.

As Leon and Alexander watch the occupation, Alexander confesses his loss of everything and asks Leon to end his life before he loses control to the Plaga. When Leon does not respond, he points a gun under his chin. Leon stops him and tells him that he needs to carry on living, even without the use of limbs to serve as the living memory of those who died. Leon then shoots Alexander in his spinal cord, severing the parasite's control over him and confining him to a wheelchair for the rest of his life. Three days later inside a hotel, Leon speaks to Ingrid Hunnigan about the mission while watching the news about the U.S. and Russia intervention of the ending civil war on TV. Elsewhere, Ada speaks to her employer about a Plaga sample she retrieved, but haggles and says that she has not quite decided whether or not to give it. Typing could be heard from Ada's employer, and Ada jests that she kinda of liked the international bounty that was added. The credits displayed cinematic scenes from Resident Evil 6.

J.D.
Add a photo to this gallery 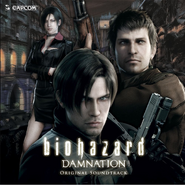 Original Soundtrack
Add a photo to this gallery