When Remy was a child, his martial artist father abandoned him. This was the catalyst for his intense hatred. His rage extended beyond just his own father and he soon learned to hate all martial artists. The only thing he truly loved was his older sister. When she died unexpectedly, Remy encased her body in a block of ice underwater in the Bay of Biscay to preserve her. In his ending, he mentions that he must "forget everything" to be happy, for it was the darkness of being a warrior that caused his father to disappear and abandon Remy and his sister. He allows his sister's corpse to sink further to the very bottom of the sea, showing that he has put his dark past behind him and has moved on.

Remy is a long-haired fighter wearing a black leather jacket emblazoned with an omega and red tight-fitting pants. In one of his win animations, he wears nothing underneath his jacket.

Design-wise, Remy is reminiscent of a King of Fighters character, especially Iori Yagami. Both fighters wear similar clothing and have also cold and aloof demeanors, however, Remy is calmer and reserved, while Iori doesn't even try to hide his hatred. Remy's Omega symbol also looks similar to Iori's crescent symbol. However, Remy's is on his chest while Iori's is on his back. On the contrary, Remy's long turquoise hair is opposite of Iori's, which is red and spiked at the front. Also, Remy's fighting style is very composed, unlike Iori's very primal and instinctive style.

Remy seems calm and composed, but is in acutality a cruel and nihilistic warrior full of wrath and hostility. Though he sees fighting as futile, as it "victimizes people, destroys love, and creates hatred", he himself continues to fight as he is unable to forgive people like his father. Despite claiming to "hate everything that he sees", he does still care for his dead sister, whom he has preserved. His hatred may be the point of madness, as Alex thinks he is insane and should get a psychiatrist in their rival battle. He does have an inquisitive, self-doubting side, as he often ponders why his opponents fight, or why he himself continues to fight despite the fact that he abhors fighting. In his ending however, Remy realizes that while he cannot forgive his father yet, he must let go of his hatred and moves on with his life.

Remy's fighting resembles the French martial art of Savate, and his special moves are very similar to those of Guile and Charlie, only using light instead of sound. He is one of the only characters in 3rd Strike that can effectively control space at all times and virtually any range with the combination of powerful long range attacks and zoning techniques.

He is also unique in that he says the name of his moves in both French and Japanese. 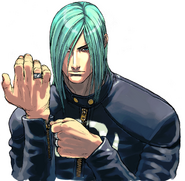 Sprite
Add a photo to this gallery
Retrieved from "https://capcom.fandom.com/wiki/Remy?oldid=140262"
Community content is available under CC-BY-SA unless otherwise noted.