Rebecca Chang is a character from the Dead Rising series of horror games. An ambitious news reporter, she appears only in Dead Rising 2 as one of the supporting characters. She is in Fortune City to cover the controversy surrounding the reality show "Terror Is Reality" and when the zombies overtake the city, she sees it as her big chance to uncover what's behind the outbreak and get her hands on the scoop of the century.

Rebecca also appeared in Dead Rising 2: Off the Record, a non-canon reimagining of Dead Rising 2 with Frank West as the protagonist, but unlike in the original Dead Rising 2 (where she was shot in the head and died), she survives the events of the game.

Rebecca Chang shares some similarities to Frank West in terms of personality. She is fame-hungry, but she is also extremely courageous and confident, oblivious to the danger.

Rebecca is introduced as a reporter working for KDED radio station with her assistant Jamie. She partners with Frank West to investigates Phenotrans' possible involvement with the rash of outbreaks in the Nevada region. It is revealed through dialog that she and Frank first met several years earlier just after the Willamette Incident, when Frank appeared as a guest on KDED's morning show and Rebecca was just starting out.

Rebecca is only heard in the game. Still working for KDED, Rebecca can be heard over the radio covering the Las Vegas Outbreak while Chuck pulls into the Brockett Gas Station in Still Creek.

Ditching KDED for Channel 6 Action News, Rebecca is now a TV reporter, a step up from her previous radio coverage. She and her crew came to Fortune City to report on the controversy of Terror Is Reality, but the outbreak hit before she could do her report. Instead, she began reporting the alleged involvement of Chuck Greene in a broadcast about the outbreak, after receiving a tip from a source. Her determination to find the truth outdid her want for safety, so her crew packed up and left leaving her stranded.

Chuck sets out to find Rebecca and sets foot in the abandoned hotel, only to have a zombie attack from behind. Rebecca shoots the zombie in time, saving Chuck's life. The two talk about Chuck being framed and how this is the story of the century. She agrees to accompany him to the security room in the Fortune City Arena in exchange for an exclusive interview, only to find both guards murdered, monitors and equipment smashed, and the security tapes stolen. Rebecca is left alone in the security room to tape the mess while Chuck retreats to the Safe House.

During a dispute with Officer Sullivan, Rebecca shows up in the Safe House and begins taping the argument and then Katey, only to receive backlash from Chuck. The pair are interrupted as Stacey spots some men in the Underground Tunnels on the security monitors. Excited for a possible development in the story, Rebecca rushes to the tunnels on her own to try and investigate.

As Chuck takes out the armed mercenaries who are robbing the city's casino vaults and disables their van outside the Atlantica Casino, Rebecca lurks nearby, filming the shootout and the aftermath, only to be thrown back by the explosion of the van, but saved by Chuck.

Rebecca is later captured and held hostage by her source, who are the Terror is Reality co-hostesses, Amber and Crystal, in a nightclub. She is rescued by Chuck and heads to the Safe House rooftop after hearing about Tyrone King trying to escape via helicopter. She and Chuck spot the helicopter landing atop the hotel and together they head over. Atop the roof, Chuck battles TK, his bodyguard and his helicopter pilot. Once TK is defeated, he is brought back to the Safe House along with Rebecca, who was filming the entire incident.

Once the military arrives in the city to begin the cleanup and rescue, she heads out to film the operation. Instead she witnesses the military being slaughtered by newly mutated zombies. She flees from the newly mutated zombies, and follows the commander of military squad, Sergeant Dwight Boykin down into the tunnels to investigate. However, she is captured and held hostage by him after he went insane. She is knocked unconscious and put inside his Humvee, though Chuck fights Boykin and rescues her.

Later in the security room, as Rebecca attempts to call for help from her news station to pick up her and the survivors, she is shot in the head and killed by Raymond Sullivan, who was on the payroll of Phenotrans, the pharmaceutical company behind Zombrex.

Rebecca is only mentioned in the game. When Frank West saves Chuck from the zombified Tyrone King on the rooftop of the Fortune City Emergency Shelter, he reveals that he and Rebecca were colleagues and friends. The pair had plan on investigating the Phenotrans facility west of the city but unfortunately, she was killed.

Dead Rising 2: Off the Record[]

Note: It should be noted that this alternate storyline is not considered canon.

Rebecca returns in Dead Rising 2: Off the Record, which is a "what-if" scenario. Rebecca resumes her role as the ambitious and fame hungry news reporter. She and Frank have a history together and this is evidenced when Frank says she isn't the weather girl anymore.

She helps Frank explore the origin of the outbreak and is kidnapped by Tyrone's goons. She is rescued and brought back to the shelter. After Frank gives her the Phenotrans laptop from the lab, she attempts to call her station only to be shot, but this time, she is shot in the stomach rather than in the forehead and the gunshot wound is not lethal. Frank believes that she is dead and after defeating Stacey, he returns to find Rebecca missing with Sullivan still where he died. Frank then finds out TK kidnapped Rebecca and asks Frank to bring him a number of things for himself and Rebecca's need.

After Frank gets everything TK wants, he is about to enter the arena but TK shocks Frank with an electric prod. Frank must survive the onslaught of zombies in the TiR Arena until Rebecca lowers a rope to bring him up. After this has happened, Frank and TK engage in battle with TK being thrown over the railing and falls to his death. Frank and Rebecca then leave the arena.

Rebecca is featured in the Dead Rising comic, Dead Rising: Road to Fortune (a four-issue comic mini-series published by IDW Publishing in association with Capcom which fills the gap situated between Dead Rising and Dead Rising 2: Case Zero) as she covers the Las Vegas outbreak. 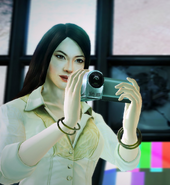 With her camera at the ready