Ranmaru Mori (森 蘭丸 also known as Hornet) was a character from the Sengoku BASARA series of action games. He wielded a bow and his element was lightning. The young page of Nobunaga, Ranmaru desired recognition from his master, and would fight eagerly for him. Like a mother, Nōhime was very protective of the boy, but he still met his death at the hands of her sister-in-law Oichi in Sengoku Basara 2: Heroes.

Ranmaru Mori is portrayed in Devil Kings and Sengoku BASARA 2 as a young purple-clad boy just on the verge of his teenage years. He is the nephew of Motochika Chosokabe. Ranmaru will do anything for Nobunaga (who obviously takes advantage of him), even help him conquer Japan. It is shown in Ranmaru's Devil Kings ending that Nobunaga pays him with three konpeitō (sugar candy), one of which he cheerfully throws into the air and catches in his mouth.

An early casualty in the series, after being murdered by Oichi, Ranmaru has since been replaced by Tsuruhime. 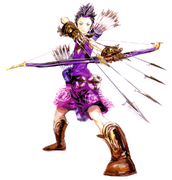 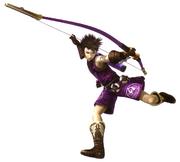 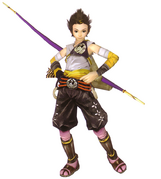 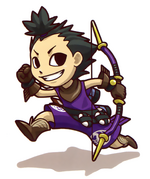 Wallpaper
Add a photo to this gallery
Retrieved from "https://capcom.fandom.com/wiki/Ranmaru_Mori?oldid=141341"
Community content is available under CC-BY-SA unless otherwise noted.