Rand Marks (referred as just Rand in the English release) is a character from the Breath of Fire series of RPG games. He is one of the playable main characters in Breath of Fire II.

Rand is a member of the Shell Clan, a race of beings that resemble a pangolin-rhino hybrid; Rand's back is covered in the characteristic layered plate found on pangolins (and can also curl into a ball similar to wild pangolins), while his ears and feet are that of a rhino.

Rand is a very sensible and practical character, and can often be seen as the voice of reason among the party.

Rand is a physical powerhouse who uses fist and gauntlet style weapons. He has strong attack power, good defense, decent magic and high health, but he lacks in speed. Rand has access to a variety of attack and healing spells, although he suffers from his limited amount of AP. His field ability is "spin dash", a move that sends him and the rest of the party rolling at high speed across the world map, and can also knock down certain walls. Rand's special battle command is Wake, which has a low chance of reviving a dead party member, which can be helpful in saving the party's supply of Ammonia, which is an expensive life restorative. The Wake command can also be used to wake up sleeping party members without causing a severe amount of damage in the process.

When Rand is joined to certain Shamans, his form can change into a small armadillo. Rand is stronger and faster in this form, but he loses his ability to spin dash.

Rand hails from a small farming community on the western continent. Prior to the beginning of the game, Rand decided to leave his home, possibly due to a dissatisfaction with small town life, and went to pursue a career in the city. He ended up working at the Coliseum, where he first encountered Ryu. Rand helped Ryu foil the murder plot during his Coliseum fight with Katt by buying the Antdt needed to neutralize the poison darts. Later he fought with Ryu against the Demon manager of the Coliseum Augus. Rand decided to join Ryu's party and went to help fix up the hideout while Ryu and Katt continued their journey. Rand would later become a permanent party member.

When the party returns to Rand's farm home, he is greeted rather harshly by his mother Daisy, and immediately puts him and the party to work in the field. Despite her harsh nature, Rand deeply cares for his mother and her well being, and he becomes infuriated when St. Eva cultists kidnap her (he does not accept their story of Daisy's conversion due to her stubborn personality). He then decides to personally travel with Ryu and the group to rescue his mother from St. Eva and help destroy the cult. 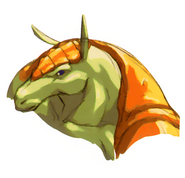 Rand (Ultimate Fusion)
Add a photo to this gallery
Retrieved from "https://capcom.fandom.com/wiki/Rand_Marks?oldid=108752"
Community content is available under CC-BY-SA unless otherwise noted.