When he was brainwashed by his nephew Hyo, Raizo became antagonistic towards everyone from within the events of United by Fate. However, after being freed from his brainwashing, Raizo's true personality is fully shown upon sight, in which he is a calm yet serious person who is quite very caring and protective towards both his family and friends. Raizo is also strict and has a straightforward no-nonsense attitude when it comes to both school and business, which is made quite notable in his son Batsu's ending, in which Batsu himself ends up having a bruised injury on his head due to the fact that Raizo had whacked his skull after seeing Batsu's lackluster grades.

Raizo has long, spiked white hair with a white beard and black eyes similar to Batsu. His eyes became red due to brainwashing from Hyo. He wears a monocle over his left eye. His primary outfit is a tan and violet formal suit under a long sleeve white buttoned shirt with a long red and purple tie on the collar of his shirt, tan pants and brown shoes. His build is hulking and muscular, and he sports sharp claws on his fingers, giving him a very beastly appearance. Like Batsu, Raizo also has X scars in both of his shoulders underneath his formal attire.

Raizo is initially portrayed as the main antagonist in the game. He is the founder and principal of Justice High School who also happens to be the estranged father of Batsu Ichimonji. Originally, Raizo was a member of a ninja clan of assassins led by his family, with his late older brother Mugen (the father of Kyosuke and Hyo) at the head of it. Despite his renowned and prestigious status from within the clan, Raizo was deeply troubled about the way of life for the ninja, in which they must always follow their superior's orders and that innocent people would often suffer because of it despite the ninja's own personal objections. Mugen's plans for the group was domination of the world through force, but Raizo however had other plans to change the world through education and left the clan in order to achieve this dream, but at the cost of having to leave both his wife, Shizuku and his son Batsu (who was an infant at the time) behind in order to make sure and see to it the clan itself didn't come after them for his betrayal.

Many years later, his personal dream is finally realized via the official establishment of Justice High School and that Raizo eventually adopts its best student, Hyo Imawano, as both a surrogate son and eventual heir to run the school. In actuality, Hyo was the son of Mugen, with the same ambition of his father to take over the world by force. When Raizo finds out about this, he confronts Hyo, but is defeated by him and brainwashed into becoming a mindless servant for him. Eventually, Batsu and his friends help free Raizo from his brainwashing while also defeating Hyo at the same time from within the process of their own resolve and determination. Even though his school's reputation is tarnished by both Hyo's actions and the resulting chaos, Raizo, who had personally reconciled with both his family and friends after the events of United by Fate is now more determined than ever to teach his students not only on how to change the world for the better, but also to be immune to tactics like the ones used by Hyo.

Raizo is not a playable character in Project Justice, but he does make a few appearances from within the game's Story Mode. A shocking and unexpected attack on him by Kurow Kirishima, which sends a seriously injured Raizo to the hospital is the catalyst for the events of the game's story. Right before the final battle of the Taiyo High storyline, Raizo makes an unexpected appearance, informing both his son and Kyosuke about Mugen's evil spirit who is currently possessing his own son, Hyo and he instructs the both of them to defeat his now possessed nephew, even if it means that they have no other choice but to kill him right after having to hear the latter’s final request.

After both the incident and Hyo's death two weeks later, Raizo was present in the Justice High ending, sleeping in a hospital bed next to Hideo, with the latter being visited by both Kyoko and Hayato.

Raizo is playable in the original game as he demonstrates his brute strength to his opponents using his bare hands and his sharp nails on both of his hands. He clawed his opponents using his sharp claws from his hands and punching them with a relative damage. He also shares the same throw from his son, Batsu and his own throw was to powerbomb at the opponent rather than a back suplex like the other characters. Unlike his son, Raizo can roll himself into a red light ball to propel himself against his opponents.

Despite being formerly part of a ninja clan in the past, Raizo hasn't been officially cited as an ninjutsu practitioner and he doesn't display any skills of the art whatsoever in his moveset.

Yasha Guruma - Raizo is able to propel himself with a red ball projectile and roll his opponent in different directions. He can also use this in mid-air against airborne opponents to make a corresponding attack..

Kyoujyuu-Reppa - Raizo will charge his opponent while slashing with his claws from his hands. He can slash his opponent on two to four times.

Roppu-zuki - Raizo goes in a defensive stance and run and slash his opponent with a severe damage.

Sekisaiga - Raizo will grab his opponent high, then push them over and leap and slash them multiple times and goes for a double head punch for a finishing move.

Imawano Style Roppu-zuki - It is a powerful version of Roppu-zuki, Raizo goes in a defensive stance and run and slash his opponent with a critical damage if it connects. If this move misses only that he would run and makes him vulnerable.

Raizo made a cameo appearance in Batsu's ending in Tatsunoko vs. Capcom: Ultimate All-Stars (as seen below). Visiting his injured son at the hospital, he notices Batsu's fighting spirit is "burning up" and declares that he is now "Burning Batsu" (a nod to his "Burning" form in Project Justice). Batsu wonders why he is suddenly at the hospital and thinks back to his training at the mountains. Raizo was sparring heavily with Batsu when suddenly the former throw him down the waterfall, a mad Batsu yells that Raizo should have showed his moves rather than throwing him, Raizo says that he raised him to become a man rather than a crybaby as they pummel at each other. 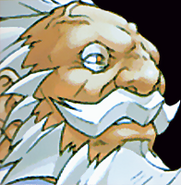 Rival Schools artwork of Raizo and a film crew as well as Hideo (right) and possibly Kyoko (left) in the background.

Batsu's ending in Tatsunoko vs. Capcom: Ultimate All-Stars
Add a photo to this gallery
Retrieved from "https://capcom.fandom.com/wiki/Raizo_Imawano?oldid=139577"
Community content is available under CC-BY-SA unless otherwise noted.