Rachel Foley is a character from the Resident Evil series of survival horror games. Her first and only appearance was in Resident Evil Revelations. She is also one of the playable characters in the game's Raid Mode.

Rachel has long blonde hair that reaches her eyes and covers the right one. She wears an FBC uniform with orange strip patterns on her arms and legs, with a Red FBC spray on her back. She has her suit zipped down to near her waist revealing ample clevelage and has a gun holster on her right leg.

Rachel seems to have some combat skills to handle normal situations that don't seem like a big deal but her skills for her last mission didn't save her.

Rachel Foley was an agent working for the United States Federal Government's anti-bioterrorism task force FBC (Federal Bioterrorism Commission); in 2005, she and her partner Raymond Vester were sent into the Queen Zenobia to investigate. They got separated due to their missions. While Rachel headed at the back of the ship, Raymond headed to the front, though along the way she acquired the key to the freight lift.

Whilst looking around Rachel discovered slime before being ambushed by an Ooze and shot the creature several times and when Jill entered the room, she had already escaped. The creature followed her through air vents and Rachel ran into a hallway with more Ooze. She shot again, only to run out of ammo and throw her gun on the ground. Rachel managed to get away and reach the elevator where she was ambushed by another Ooze which cut her leg. She avoided death one final time as the elevator doors opened, allowing her to escape and lock herself in the research room. It was in the research room where she met her end. Surrounded, Rachel was choked as an Ooze fed on her bodily fluids and infected her with the T-Abyss, finally throwing her at a window. During this time Jill was looking for the Crew Quarters key and arrived just in time to witness her death.

Rachel's intentions on board the Queen Zenobia were seemingly to investigate and transfer the ship for disposal, unwittingly to erase any evidence on board that might incriminate Morgan. Later on, when the player gains her journal, it becomes known that Rachel actually did not want to go on the mission and had a very grim and pessimistic view on her survival chances, a prospect that grimly became very real.

Shortly after her death, the t-Abyss virus kicked in and transformed Rachel into a seemingly unique Ooze. As Jill returned to Rachel's corpse to find the freight lift key, she noticed that her body was gone. Jill left the room and was attacked by Rachel, now transformed. She confronted Jill several times, always fleeing after taking heavy damage, but Jill continued to encounter her until she met up with Parker and the pair apparently killed her.

However, Rachel survived the encounter and frequently attacked the duo as they explored the ship (which greatly annoyed Parker). She was incredibly resilient to gunfire, being downed several times after Jill and Parker initially "killed" her.

Rachel was presumably destroyed and killed for real permanently when the Queen Zenobia exploded. 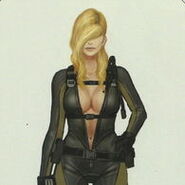 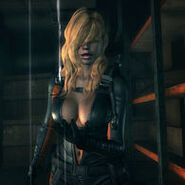 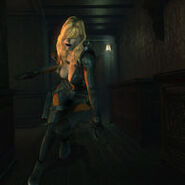 Rachel running after being attacked.
Community content is available under CC-BY-SA unless otherwise noted.
Advertisement