Mika is a tomboyish girl who prides herself on going all out and wowing the crowds with her wrestling moves. She can be a little rough around the edges, but definitely has potential for the pro circuit. She idolizes Zangief and considers his way of fighting as the ideal route for herself.

After graduation from a local junior high school, Mika decides to go for her goal to become a female pro wrestler, starting as the pupil of Harmageddon Youko. By way of a several year-interval training period, Rainbow Mika was ready to make her debut as a pro wrestler. She thought of the perfect promotion to make her a star - she would travel the world and fight famous street fighters in order to become the "Star of the Ring". R. Mika meets the great Zangief on the way and cooperates in some way with his mission to destroy the Psycho Drive, though they end up rescuing people with E. Honda as well. Afterward, Mika continues to train as a pro wrestler so that she can finally meet him (Zangief) again later on.

At some point in the story, Mika meets Karin and the two fight. Karin is so impressed with Mika’s fighting ability that she promised that the Kanzuki Zaibatsu would sponsor Mika if/when she becomes a first-class wrestler. Six months after the Psycho Drive was destroyed, Zangief finally met R. Mika at her home stage for a public bout. In just under 20 minutes, Zangief finally trounces Mika with a Final Atomic Buster; despite the devastating loss, she still has nothing but respect for him afterward. Zangief remarks that she's got a high wall to climb, but she is well underway.

Mika is primarily a grappling character, whose main weapons are high-priority command throws. Unlike most grapplers in the Street Fighter series (and fighting games in general), who are slow and heavy, Mika is fast and agile. She has a fairly high and quick jump, and walks quite rapidly. Mika's normal attacks are diverse and useful, but aside from two command throws, her specials are none too impressive, so they must be used as a vital part of play strategy.

Like Dan, some of Mika's special attacks are rather comical. In her Flying Peach and Shooting Peach specials, she flings herself into her opponent buttocks-first, and mostly falls on it and has to rub it due to recoil. For her opening taunt and Beach Special Super Combo, she uses the top turnbuckle of a wrestling ring that appears from the side of the screen. The sudden appearance of a turnbuckle is amusingly redundant when Mika is fighting on her own stage at a beachside wrestling ring. 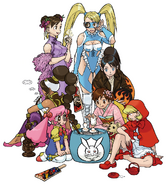 Mika and Nadeshiko SFVCE
Add a photo to this gallery
Retrieved from "https://capcom.fandom.com/wiki/R._Mika?oldid=137528"
Community content is available under CC-BY-SA unless otherwise noted.