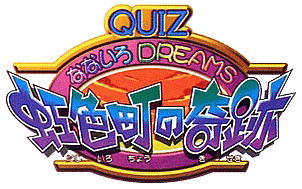 Quiz Nanairo Dreams - Nijiirochō no Kiseki (クイズなないろDREAMS 虹色町の奇跡, Quiz Nanairo Dreams - Nijiirochō no Kiseki? lit. "Quiz Seven Color Dreams - Miracle of Rainbow Color Village") is an arcade quiz game released in 1996 on the CPS-2 arcade system board only in Japan. It was later ported to the Sony PlayStation and the Sega Saturn in 1997, for mobile phones in 2006-2007, and for the PlayStation Store on July 27, 2011.

The game combines elements of a quiz game and a dating sim. Answering questions in the quiz allows the player to move through squares. Correct answers increases the love of the female characters and advances the plot.

A quiz game that answers quizzes that are given questions as you move through the squares. The correct answer to the quiz increases the love and confidence of the girl, and the story unfolds.

The game was originally an arcade title, and when ported to home console, two new routes were added. The two new scenarios were for Pixy and Lindt.

In the small Nijiirochō in the Pacific Ocean, a crystal seal was scattered. Without this crystal, a devil would be revived and destroy the world. Smashed into seven crystals, they somehow ended up with seven girls living in Nijiirochō. In order to reclaim the power of the crystal, the girls and "heart ties" are needed. The devil will be completely revived in six months. To save the world from ruin, a "player" that lives in Nijiirochō was chosen by Pixy for the task.

In the arcade version, the seven main characters were named after candy companies that sponsored the game. When the game was ported the characters were renamed, most likely because of license issues. 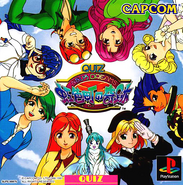 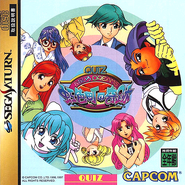 Retrieved from "https://capcom.fandom.com/wiki/Quiz_Nanairo_Dreams?oldid=141405"
Community content is available under CC-BY-SA unless otherwise noted.