Mage is a little girl and mage, and one of the four warriors who must stop a villain from creating chaos in the world of the Capcom Kingdom. In the game, she can choose the genre of her questions.

She wears a green jester like hat along with a green turqouise turtle neck dress and a light blue shoulder shaw with a sapphire in the middle. Her hair is two long brown-colored ponytails tied at the bottom with green lace. She carries a large magical rod with her.

Pure has been seen in several Capcom games such as Marvel vs. Capcom as an assist character (along with other characters such as Saki and Tong Pooh), who help the player fight their foes. Her companion, Fur the Cat, also joins her in the game. For their action, she leaps and lands on the ground, waving her magical rod in the air, making dice fall upon the enemy while Fur jumps in the air and rolls around.

Pure also has a cameo in Street Fighter Alpha 2 as one of the guests/spectators in Ken's homestage, a birthday party for his wife, Eliza. She is in the pool along with Felicia and Lynn from Alien vs. Predator, who makes a special cameo-guest character appearance. She also had a doll cameo in the original build for Spring Man's stage in Mega Man 7, but was ultimately removed due to the stage being completely redesigned from scratch for the final release. 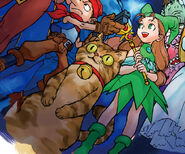 Pure as an Assist Character

Her cameo in Street Fighter Alpha 2