Prince is a character from the Star Gladiator series of 3D fighting games who appears in the second game, Plasma Sword: Nightmare of Bilstein.

The name "Prince" is an alias for Saturn Kuida-Ore the 3rd, who is the royal prince of the Planet Saturn and fights with Plasma Yo-Yos. Prince grew jealous of Saturn Dyer as he got more attention from the citizens of their home planet and eventually developed a strong determination to defeat Saturn and prove that he's a much better street performer.

After adopting the alias of "Prince", he allies himself with Bilstein and uses the Fourth Empire's influence as a front for chasing his own rival. 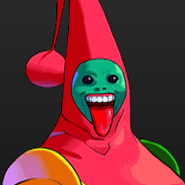 Prince (portrait)
Add a photo to this gallery
Retrieved from "https://capcom.fandom.com/wiki/Prince?oldid=118193"
Community content is available under CC-BY-SA unless otherwise noted.