Pharaoh Man (ファラオマン, Faraoman?) is a boss character from the classic Mega Man series of platformer games. He is a Robot Master originally created by Dr. Cossack to explore pyramids, but was modified for battle by Dr. Wily in Mega Man 4.

Pharaoh Man was created with high resistance and agility to avoid traps in pyramids and has very sensitive eyes to be able to see in dark places, but this also makes him vulnerable to bright lights like the Flash Stopper. His main weapon is the Pharaoh Shot, a devastating weapon that can be charged with solar energy.

His stage in Mega Man 4 is swarming with Battontons, staying with his theme of being one of the more creepy and sinister Robot Masters. 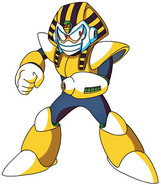