Paula is a main character from the Dino Crisis series of horror games. She first appeared in Dino Crisis 2 (as a non-playable character) and then in Dino Stalker.

Paula is one of the mysterious hostile survivors of Edward City apprehended by Regina. She acts rather timid around Dylan Morton, and is also somehow a part of his life. She plays a significant part in the story, and appears randomly throughout.

Mike Wired, who was teleported from his timeline, makes it to the main land, he hears a voice on his new wrist communicator, telling him to find a girl called Paula. When he does find Paula, she simply replies with "Trinity" (a dinosaur with significant intelligence) before more dinosaurs appear. Eventually, Mike sees Paula is trapped in a ravine and is able to save her. After they escape in a jeep through an empty town, it is revealed that the man talking to Mike is Dylan Morton, who is revealed to be Paula's father.

The finale takes place inside a volcano, filled with red hot lava and one very large Tyrannosaurus which the player must defeat. After the fight is over, Mike gets sent back to his own time, in the same plane fight he was in at the beginning of the game. A rival plane shoots his down, and as he parachutes out, bullets are shown about to hit Mike right before Paula teleports the bullets elsewhere. 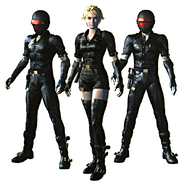 Paula (along with "Time Travelers") as she appear in Dino Crisis 2.

Promotional art of Paula and Mike in Dino Stalker.
Add a photo to this gallery
Retrieved from "https://capcom.fandom.com/wiki/Paula?oldid=132876"
Community content is available under CC-BY-SA unless otherwise noted.