Parker Luciani is a character from the Resident Evil series of survival horror games. He made his debut in Resident Evil: Revelations where he is partnered with Jill Valentine to track down Chris Redfield and his partner Jessica Sherawat.

Parker is a half-British and half-Italian man with shoulder length dark brown hair, brown eyes and a full beard. In it's initial appearance, he wears a standard BSAA outfit; a dark gray shirt with logos of BSAA in each sides being red and black under his olive green vest with several pockets where he keeps his radio, blue gray jeans with a black nylon utility belt where he keeps his handgun and ammo and black and olive green shoes. He is also wears a light gray cap with black headphones.

Later, he wears a wet suit during their mission in Queen Zenobia; a black and orange wetsuit beneath his light blue green and silver flak vest with several pockets, he is also equipped with gray holsters within his brown belt where he keeps his handgun and grenades and silver and brown aquatic shoes.

Before he was recruited in BSAA when he was still the member of FBC, he wears a dark gray long sleeve button shirt beneath his black tactical vest with the logos of FBC, gray jeans with black holsters to keep his guns and black shoes.

In the Resident Evil manga, BIOHAZARD Heavenly Island, Parker is depicted with shoulder length black hair and with gray streaks due to his age. He retains his initial outfit in Revelations but with minor change; both his cap and vest are spring green, his shirt is now dark blue, his jeans are pale blue and his black and olive green shoes are replaced with black shoes where he previously worn during his FBC days. When his injuries are treated, he is in shirtless while being covered with bandages on his chest, left shoulder and arms where one of his arms covered his anchor tattoo and is not seen wearing his cap with headphones.

Parker is a member of the Bioterrorism Security Assessment Alliance and former member of the FBC. An Italian of English descent, and Jill's current partner for the Queen Zenobia infiltration misson, Parker is known for his uncompromising dedication to his duty. While he may seem composed most of the time, his hot-blooded nature often reveals a sincere, awkward streak that is difficult not to love. Parker transferred to the BSAA from the FBC following a certain incident one year earlier, an incident that appears to be inextricably linked with the current mission.

Parker was originally a member of the FBC tasked with helping out during the Veltro terrorist attack of Terragrigia. However he and his partner Jessica barely managed to make it out alive and fled into the FBC building. Unfortunately, the building had already been breached with many Hunters. During their trip to the Command Room, they meet the new cadet Raymond Vester badly injured by the hunters.

Parker and Jessica escort him to a safe hall and go to get medical bandages for him. After they succeed, he and Raymond began bonding. When they arrive at the command room, they meet Morgan Lansdale collaborating with Jack Norman, and in the midst of betraying him. After that, they are ordered to escape the city in a helicopter. After fighting numerous Hunters in the building, Parker and Jessica finally escape the city.

Parker and Jill skipper a tugboat into the Mediterranean Sea following Chris and Jessica's last known coordinates, which led them to a stranded cruise ship named Queen Zenobia.

Not long after boarding the ship, Parker and Jill realize that the entire crew of the Queen Zenobia had been turned into monstrous bio organic weapons named Ooze and are forced to fight for their lives. After they defeat their first Ooze Parker decides to stay behind to study the creature, while Jill forges onward. She finds what appears to be Chris in a locked room and searches for a way to open it. Eventually finding the key on the body of an F.B.C agent Rachael Foley. She and Parker enter the room to discover that what appeared to be Chris was actually a dummy, and that they had been caught in a trap as the entire room gets flooded with sleeping gas. Just before they fall unconscious a Veltro agent enters and proclaims that it's time they learned the truth.

Parker awakes in one of the ships cabins without his weapons and gear. Separated from Jill, he searches around for a way to regroup with her, finding their stolen equipment in the process behind a locked room, he is unable to enter the room and so resolves to find Jill. They meet up again in the dining hall and together, retrieve their gear and set out to contact the BSAA's headquarters

Once at the communications room they find that they cannot contact headquarters due to problems with the ship's antennae array located on the top of the observation deck.

After Jessica is revealed to be a traitor, she sets the Queen Zenobia to self-destruct. Parker is later seen dangling above a series of explosions after the floor he's standing on collapses. Jill and Chris reaches out to try and save him, grabbing Parker's arm before he falls. As he hangs there, Parker says; "see you, guys" before falling into the explosion below. It is later revealed that Raymond Vester saved Parker from the explosion. Parker was then found adrift off the shore of the Republic of Malta in the Mediterranean Sea. He resumed his position as a Special Operations Agent for the BSAA after a month of recovery.

In the manga BIOHAZARD Heavenly Island, which takes place in 2014; nine years after the incident of Resident Evil: Revelations, Parker Luciani takes the lead as an SOU Captain from the BSAA South American branch as he and his group were sent by Chris to assist his younger sister and TerraSave member Claire Redfield to rescue Inez Diaco and the other survivors from the Idol Survival program at the Sonido de Tortuga Island at the hands of Schaube Damon and Morio. As BSAA officers were being wiped out by two B.O.W's. Parker stayed behind to fight while buying some time, allowing Claire and the survivors to escape. He was severely injured and knocked unconscious by Damon but he is able to survive when two B.O.Ws are attacking each other instead of killing him. After the creatures departed, Parker regained his consciousness and got in touch with a backup helicopter team to evacuate the survivors. He arrived at the Emerald Beach to stay with Claire at Marilou Mabou's helicopter after battling the mutated Zi Li but was forced to turn around and to rescue Mayu, Takeru Tominaga and fellow BSAA agent Hendrick after their helicopter was destroyed by Zi Li's attack. 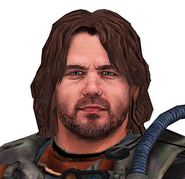 Resident Evil: Revelations (HD version)
Add a photo to this gallery
Retrieved from "https://capcom.fandom.com/wiki/Parker_Luciani?oldid=138992"
Community content is available under CC-BY-SA unless otherwise noted.